MAP21: Compact Castle is the twenty-first map of 2048 Unleashed. It was designed by Pinchy and uses the music track "Garden of Delights" from 30in30 by James Paddock. 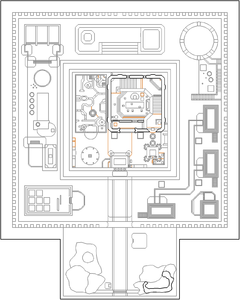 Map of Compact Castle
Letters in italics refer to marked spots on the map. Sector, thing, and linedef numbers in boldface are secrets which count toward the end-of-level tally.

Take the shotgun in front of you then head east towards a tall tower, killing some zombiemen along with three demons that rise from the floor on your right. When you reach the tower, look to your right to see a lion switch next to a ledge with three imps - press the switch to lower a nearby lift that you can use to get on the ledge, which has a second switch that will open a hedge maze near the start point. Go back to the start and head north into the maze, then pass through a narrow doorway and turn left, right and right again to reach a fountain. Step round the fountain and kill two demons hiding behind a wall that lowers, then head north-west through an opening then go straight forward past a wall with a candelabra. Run up the wooden stairs here to land in an enclosed area where a chain switch is guarded by a spectre.

Pull the chain switch then head south up some steps to leave the enclosed area, then return to the start point (watching out for a revenant that has appeared on the fountain) and look north-east to see that the large door leading into the castle has opened. Go into the castle and turn left to see a white teleporter which will send you to a platform by the large tower you saw earlier - go round the corner and kill two imps and a Hell knight that teleport in around you (you may want to drop off the platform and kill the monsters from ground level) then pull the chain switch here and go back inside the castle to find that a set of marble bars have opened so you can go through to the dining room.

The bars will close behind you as you enter - kill the imps that teleport in around the table then take the armor and step into the white teleporter between the marble blocks to teleport to a platform by the start point. Kill the knight and cacodemons that teleport in then step across to a chain switch and pull it before going back into the castle and returning to the dining room. Go to the north-west corner and kill the imps that teleport in behind you then climb up the stairs - at the top, kill two demons and two revenants that are hiding behind a wall which opens in front of you then pull the chain switch they are guarding to open the bars blocking the next flight of stairs.

Climb up the second staircase and kill the demons that teleport in then press the skull switch on the marble block to lower a lift behind you. Ride the lift up to the top of the tower and kill the cacodemons waiting here, then step across to the tower and pull the chain switch to finish the level.

A chaingun and a chainsaw can be found inside the hedge maze, guarded by a revenant and a spectre respectively.

A rocket launcher can be found on a table in the south-west corner of the dining room.

* The vertex count without the effect of node building is 4039.