MAP21: Conflux is the twenty-first map of Hell Revealed II. It was designed by Jonas Feragen and uses the music track "DDT Rides Again" by Sam Woodman. 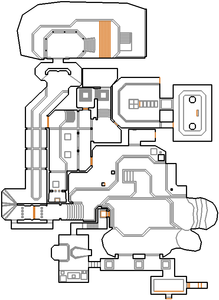 Map of Conflux
Letters in italics refer to marked spots on the map. Sector, thing, and linedef numbers in boldface are secrets which count toward the end-of-level tally.

Get rid of the shotgun guys up above. If you need supplies, head around, not up, the shotgun guys' platform for some ammo and a chaingun. Now head through the passage. You will find several demons, but take the first door you see to continue. Inside, get the super shotgun and kill any enemies you can here, then head for the door to the north. Kill the baron of Hell inside and the mancubi that follow, then open the next door. Inside is the yellow keycard on a bridge. Flip the switch to open a passage, then enter it to find several shotgun guys and another switch. This one causes a platform to lower. It lowers slowly, so you need to fend off some teleporting enemies while it does. Look out for the revenants on the platform when it lowers all the way, and retrieve the yellow keycard. Return to the room with the blue bars and yellow door and take the yellow door out to the big courtyard. Fight off several monsters here. Be careful not to fall in the nukage as there is no way out. Open the door closest to the nukage and take the lift up. Follow the halls until you reach a switch. Watch out for teleporting imps as you return to the big courtyard, then take the steps that are to the southwest. You will find the blue keycard, some boxes of ammo, and a berserk pack, and the bars in front of you will also open, leading back to the hall that had plenty of demons. Go back to the door that had the blue bars, then open them for a red skull key. Grabbing it causes you to teleport to the big courtyard. Your next order of business involves going back to the switch that opened the way to the blue key, as the red door was also there, but you have to contend with hordes of barons of Hell and Hell knights in the courtyard, as well as arch-viles resurrecting enemies in the hall you need to go through. Open the red door and kill the spectre, then flip the next switch for a teleporter back to the courtyard. Take out the arch-vile and then proceed north to find the exit.

* The vertex count without the effect of node building is 1550.