MAP21: Crunch! is the twenty-first map of 10 Sectors. It was designed by Vlad Sosedkin (blod) and uses the music track " ". 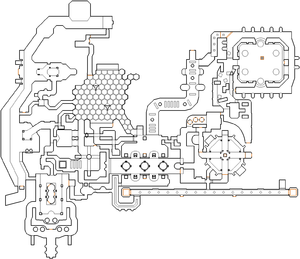 Map of Crunch!
Letters in italics refer to marked spots on the map. Sector, thing, and linedef numbers in boldface are secrets which count toward the end-of-level tally.

Head around the walls here and drop down to the metal floor below (there is an opening on the northwest in this room). Then head through the tunnels until you find a switch.

This map does not contain any keys, but it will still take a considerably long time to complete with how the lifts that are now activated work. To exit the map, you need to press several switches to raise a nukage river in the western part of the map. The exit is across the river.

* The vertex count without the effect of node building is 3501.