MAP21: Den of the Skull is the twenty-first map of Requiem. It was designed by Anthony Galica, and uses the music track "The Everlasting Negative" by Mark Klem. It is the biggest level in the megawad.

You are trapped in the den of the skull, and it is not a very safe place...
only your best fighting ability and intelligence will help you through. There is a large and complex world ahead of you that you must get through, filled with surprises and wonders as you fight evil to save yourself and the world once more.. otherwise, it will be your REQUIEM they are singing... Keep in mind that the exit is for Authorized Personnel Only. 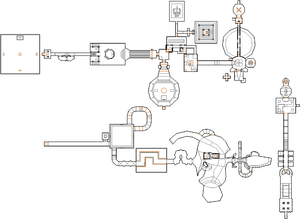 Map of Den of the Skull
Letters in italics refer to marked spots on the map. Sector numbers in boldface are secrets which count toward the end-of-level tally.

Enter the teleporter and open the door in front. Grab the blue skull key that is sitting in the next room, then keep heading north through the next door. Look out for chaingunners from the windows as you cross the corridor to the other side. Open the door and drop into the pit to a small metal section, where approaching the marble floor causes it to rise up. Press on it to use it as a lift, then ride it up to the 'X' symbol. This is a teleporter, use it to go to a different section of the map. This one puts you in a small room with a skull symbol and some mancubi directly behind you. Open the door, and approach the next door to have the corridor lower to a different corridor. Follow this one to a room with a barred structure in the middle. Head towards the backside of the structure to see that one of the bars is a dark metal color. Use this bar to open all of the bars, then press on the gargoyle face spewing blood. This opens up something behind it. This is a switch as well as the yellow skull key. Shoot the switch so you can leave, watch out for some monsters hiding in alcoves, and approach the end of the corridor for it to rise back up. Now take the yellow door to the south that you could not get to before. In the next room, grab the rocket launcher and climb the steps and cross the bridge that forms to the other side. Take the lift up to a room with a baron of Hell and some other monsters. A corner will open up revealing a half-pressed switch. Press the side that is not lit to open a wall to the south.

Press on the faceted wall and the next wall after it to reveal a room with imps and a BFG9000. Go to the back of this room and press the switch to reveal a small room with a blur artifact. Grab it and head down the stairs. Do not head out of this room yet, as a new switch has formed in the nukage. Press it and head back up the stairs. From the room with the blur artifact, make a running jump off the railing to reach the platform with the BFG9000. Now get out of this room, back to the place where you opened this area up, to find the western wall is open. Go through here killing the pain elemental in the hallway. In the next room are several imps in cages, and a monster guarding some computer panels. This monster is a revenant on Hey, Not Too Rough or lower, a mancubus on Hurt Me Plenty, or an arch-vile on Ultra-Violence or higher. Kill the monster and inspect the left computer panel to raise some stairs up. You will raise not only the stairs going up to the cages, but also an invisible staircase to the corridor directly to the west where a baron of Hell is. Head through this corridor, going through the side area at the cave-in, to the teleporter at the end. When you teleport, it appears that you are in the sky with several imps and switches. The northern switch is blocked off. To solve this puzzle, press the west, south, and east switches to lower them (in any order you like), then grab the health bonuses that were on top of them. This should reveal the northern switch. Press the northern switch and leave this area.

Now you need to backtrack all the way back to the room with the blue key. Head all the way back to the room with the skull symbol, and step into the middle to teleport back to the room with the 'X'. Use the metal lift to go back to the corridor and return to the room that had the blue key. There is a new switch on the right, which uses the yellow key. Press it to open the bars around the red key pedestal. Head inside its room and press the switch behind it, then quickly run back to the room to the southwest corner that had a zombie inside and press the switch there. This raises a block so you can get the switch in the northwest corner. After pressing that one, run to the southeast corner and press the switch there to lower the switch blocking access to the red door. Do not forget the red key, as you can now grab it. Head behind it to a hallway, which has a crusher in the middle. Open the door at the end of the hallway to reach a small cargo room. Head all the way around the crates and use the small crates to attempt to loop back around. You will cause some crates to lower. There is one nearby that a revenant appears on, and one behind you that holds a switch. If you flip the switch there, it causes a crate in the northwest corner of the room to lower, and riding it up, you will find a teleporter on the northwestern-most crate. Take this teleporter to the next part of the level.

Go through this hallway killing the Hell knight (or baron of Hell) as you head into the square yard. Cross into the next hall circling around until you are above the yard you were previously in. There are four switches to press here, so press all of them and head back downstairs. Back in the previous hallway where you entered the area from, there is an opening to the right with a block. The back side of this block is a switch, so use it and head back upstairs to find some bars are open to the next part of this area. Follow this hall to a room with a red path on the ground and a "CAUTION" sign in the middle. Kill the spectres here, and tread along the red path, for if you deviate, you will die. Once you are across, follow the passage to a canyon-like area. In here there are three paths. The left one has the entrance to the exit, but you cannot enter it yet, so take one of the other two paths. You will see a waterfall. Go through it and then through the next waterfall, then climb the rocks up to a small corridor. Approach the fence and you will trigger a switch to appear behind you. Press it to lower the gate, then head through the corridor on a bridge over the canyon to a teleporter.

The next place you enter appears to be a torture chamber of sorts. Head into the water killing the arachnotron and the demons on the other side. Keep going north until you reach a large room. There are a few imps in this room, so kill them and take the stairs up. Now shoot the switch you see to raise a bridge so you can reach the next door. Behind it is a guillotine and a switch. This switch opens the door back in the canyon, so you need to head all the way back now. As you are heading back, look out for blade traps that may appear from the ceiling in the long hallway. There are several monsters back at the canyon, including a cyberdemon. Make sure to kill them before taking the door that has the exit. You need to press the computer terminals to open the exit.

The level's REJECT lump is 65536 bytes too small, which will result in demos recorded on this map desynchronizing even with the same executable used to record them. It is also impossible to obtain 100% Kills on the original version; the monster teleports into the second room, intended to trigger when fighting in the sky at the west of the map, will fail, as the storage sector the monsters are in is connected to a sector with a deep water effect, which monsters cannot see into or out of. To resolve both issues, save the map into its own file ("req21.wad," for example) using a level editor, and then run ZenNode on the file using the command line arguments -rz req21.wad (or whatever you named the file,) which will, aside from rebuilding nodes, create an empty REJECT. Although rebuilding the nodes this way will create rendering errors in the sky segment and the bridge in the mountainous region, and will also create a gap in the middle of the bridge, this will allow 100% Kills.

Because one of the secrets cannot be triggered, only 88% Secrets can be obtained.

Two health bonuses and two armor bonuses reside next to the teleporter leading to the sector with the deep water effect in the western part of the map. These items are not obtainable however, as the sector they are in is too small for the player to actually pick up the items. Because of this, only 87% Items can be obtained.

To fix the REJECT issues and allow demo recording, Rudy Jurjako created a fixed version of the map with rebuilt nodes, on which he recorded his 8:10 UV max demo (rq21-810.zip), that can be found [1]. However, this only works with Rudy's demo; every other demo available for this level on Compet-N will desynchronize with his fixed version. They will only play back with the version of the map created using the method outlined in Bugs.

Although Rudy's UV max demo is technically faster, Xit Vono's 8:38 demo took its place on the table regardless, as it obtains 100% Kills, whereas Rudy's only obtains 96%.

* The vertex count without the effect of node building is 3187.