MAP21: Engine Core is the twenty-first level of Icarus: Alien Vanguard. It takes place at the engine core of the exploration cruiser, Icarus, and was designed by Dean Johnson and uses the music track "Ripsnort" by Jeremy Doyle. 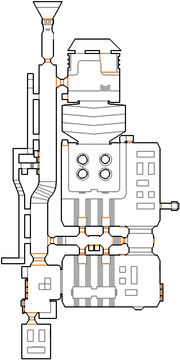 Map of Engine Core
Letters in italics refer to marked spots on the map. Sector numbers in boldface are secrets which count toward the end-of-level tally.

You only need the red key to finish this map. For the quick way, head into the hallway to the north. You can do this by pressing the switch on the area that you are on to open two garage doors, then climb the steps up heading westward through two doors. You can also climb the silver steps and take either northern door to reach the hall, then go westward through the door to appear in the large western hallway. Head through the door to the south and the door behind it. The red key will be in this room, so take it and run all the way back down the hallway to reach the "SIMU EXIT". Press the furthest panel on the right to exit.