MAP21: Entering Aquatic Desert is the twenty-first map of Sunlust. It was designed by Zachary Stephens (Ribbiks) and Daniel Jakobsson (dannebubinga), and uses the music track "Ocean Flute" composed by Stuart Rynn. 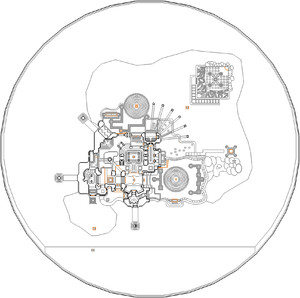 Map of Entering Aquatic Desert
Letters in italics refer to marked spots on the map. Sector numbers in boldface are secrets which count toward the end-of-level tally.

Three keys are on this level but the level does not require you to collect all of them.

Collect all needed items in the room and leave it. Drop down to the room below where the blue key platform is seen and dispose of zombies that hide in alcoves, then head to the stairs leading to the western compartment. Dispose of revenants in the western room. After this, press the switch to unlock the key. Return to the previous room. Take the keycard and quickly go to the stairs, then to the east room, as a bunch of demons will be spawned along with an arch-vile or a revenant (this depends on the skill level). Use the blue teleporter to get back to the starting place looking toward east.

Leave the starting room and drop down to the room below where the blue key should be (and dispose of enemies in the alcoves). Head up on the stairs and look at the watery area. Kill the mancubi first and jump to the area. Kill all enemies here and press the switch (from Hexen). This switch will lower a blue teleporter pad on which chaingunners spawned. Use this to teleport to the yellow keycard (which is right behind you). Now fight the enemies and find the blue teleporter to get back to the starting area.

If you want the plasma gun drop down to the blue key room again and head to the stairs. Go right and walk up the other stairs. Open the yellow barriers and get the weapon.

Once returned to the starting room go on the stairs that will lead you to the jumping ledges. Run-jump to the other side. Press the blue switch or the yellow switch in the room depending on what key you have or press them both (a switch is enough). Once you did, the bars will lower letting you visit the south-east. Drop to the ground. A spiderdemon should spawn on the large pool of mud (if you have BFG9000 and enough cells better drop on this pool and kill the spiderdemon with this weapon). The overall courtyard will be soon infested with enemies too. Deal with them and explore the perimeter around. Press the skull switch and you will be able to enter the bottom parts of the castle. However, the mud hurts. Prepare to fight with a cyberdemon on HMP and higher or four barons on HNTR and lower. Though, you can quickly dodge him running forth if you are not prepared. The walls will open revealing spawning of other monsters. Infighting is possible but the mud hurts. There is a radiation suit behind mud waterfall which can be seen to the left of the cyberdemon's (or barons') platform. After all, go on the staircase to the other room. After you get the key the wall to the left will open, so prepare for a chaingunners ambush. Then, drop down to the castle room (which is the western room you were in).

Get back to the starting room again by using the blue teleporter. Run to the room with three switches each requiring the key. Flip the red switch now and mind a mancubus behind you (also, you may wish to find secret #2 here). To the right of the red switch you can discover another area which has a tile floor. Jump there. Click a switch here (Hexen) and prepare to fight with two clusters of enemies, one of which is revealed behind the opening wall. The second cluster will spawn a bit later. Find the second switch (either from Hexen) and wait (probably fighting back of spawned ones) until the exit staircase will be accessible. When the staircase is built and the long bridge is risen you can finish the level by stepping over the portal.

This level is normally pistol start only, but it is possible to avoid dying at the exit of MAP20 with the secret invulnerability.

An imp (Thing 528) near the megasphere and backpack in the south-center of the map has no flags set for any of the three difficulty classes, so it does not actually appear in the level, and that is just as well because it is also at the same position as a Hell knight.

* The vertex count without the effect of node building is 7890.