MAP21: Euronymous is the twenty-first map of MAYhem 1500. It was designed by Jeff King (Egregor) and uses the music track from MAP07 of GothicDM 2, composed by Marc Pullen. 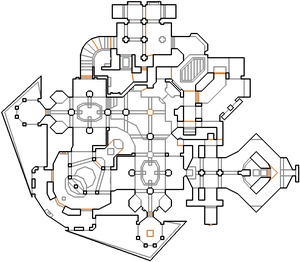 Map of Euronymous
Letters in italics refer to marked spots on the map. Sector numbers in boldface are secrets which count toward the end-of-level tally.

All eight deathmatch starts (Things 319 through 322, 342, and 351 through 353) have no flags set for any of the three difficulty classes, but because of special handling in the engine, they function normally in the level.

Furthermore, the following multiplayer-only things have no skill flags set either, so they do not actually appear in the level: