MAP21: Factory: Manufacturing is a level in Strife. It uses the music track "Tech".

With Macil slain, Strifeguy learns that the Order's factory leads to a laboratory where another piece of the Sigil has been detected. To get there, Strifeguy must pass through the factory's manufacturing wing where he will face its newest creation - the inquisitor. 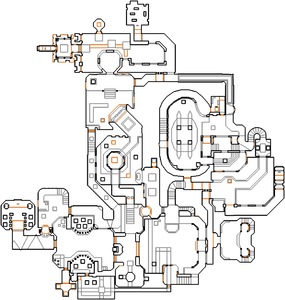 Map of Factory: Manufacturing
Letters in italics refer to marked spots on the map. Sector, thing, and linedef numbers in boldface are secrets.

Lower the lift in front of you and ride it up. Go around the corner and destroy the ceiling turret above, then go through the door to a room with numerous enemies including stalkers, sentinels, a crusader and a reaver. Cross the room and go through either of the doors at the east end, then ready your strongest weapons and go through the large door ahead. An inquisitor will jump down from a ledge ahead, and will start firing powerful grenades at you when it lands. Using the Sigil or the mauler's torpedo mode is strongly recommended to destroy it quickly.

Once the inquisitor is destroyed, approach the lift at the east end of the room and ride it up, then turn right and follow the walkway to a staircase leading to a small room with a switch. Turn the switch to lower a wall across the room and reveal two crusaders on Training or Rookie skill levels, or another inquisitor on Veteran or higher. Once the enemies are dispatched, head back down the stairs and follow the walkway round, past the lift to another staircase which you can now climb. At the top, turn right and go down the steps, destroying the reaver at the bottom.

Step on the lift ahead and it will take you to a walled path surrounded by water - from here you can visit the level's other points of interest. Otherwise, head south into a corridor and follow it round. Destroy the ceiling turret at the end and step through the striped doorway to open the door ahead. Go through and cross another striped doorway to enter the proving grounds.

From the room leading to the proving grounds, go to the west wall and lower the southern lift. Ride this up and left left, then head down the passage until you see a doorway on your left with a laser. Jump or step over the laser (it activates the alarm but you will probably have done so already with weapons fire) to enter a room with two enemies and (on Training or Rookie) numerous supplies. In the Veteran Edition, this room also holds the blue offering chalice that Timothy in the commons is looking for.

From the room leading to the proving grounds, follow the walkway between the water pools and destroy the reaver ahead. Go forward up the curved staircase, then turn right at the top and turn the switch ahead, which will temporarily raise a bridge. Cross the bridge into a passage (watching out for a ceiling turret) and follow the passage until you find another turret, then turn right to go through another doorway.

Secret #1 is present in the original game. The non-official area below was changed to an official secret in the Veteran Edition.

* The vertex count without the effect of node building is 2750.