MAP21: Failed Experiments and Trashed Aircraft is the twenty-first level of the first episode of Back to Saturn X. It was designed by Nick Laurent (hobomaster22) and Richard Frei (Tarnsman), and uses the music track "Heliotrope" by James Paddock (Jimmy). The par time is 2:45. In the official add-on version, this level's name is Trash and Sewer With Pestcontrol. 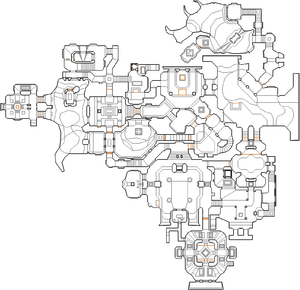 Map of Failed Experiments and Trashed Aircraft
Letters in italics refer to marked spots on the map. Sector, thing, and linedef numbers in boldface are secrets which count toward the end-of-level tally.

Drop down the hole in front of you to land in a cavern with a couple of imps and demons, take the nearby shotgun then head up the steps past a UAC screen to a doorway with a couple of zombiemen; watch out for one or two revenants hiding behind the west wall as you climb. Head east and south up two sets of steps before fighting your way past a demon to a door, then open it to reach an outdoor area overlooked by one to three arachnotrons. Activate the lift on the south side of the grass and ride it up to the arachnotrons' platform, then open either of the doors ahead and go through to the next room, noting a Hell knight and one or two demons that are released to your left. Leave the room by the west doorway and go straight forward to a large nukage pit that is bordered by a walkway.

Go up the steps at the north side of the walkway (an arachnotron is positioned here on Hurt Me Plenty (HMP) skill level or higher), turn left at the top then follow the hallway until you get to a door. Open the door and head forward across a bridge, which leads to a room with a high platform holding barrels and an armor, then open another door at the top of the east staircase and head straight forward up some more steps to find some imps and a knight (plus a chaingunner in hiding on HMP or higher) protecting a switch. Flip the switch to raise a bridge leading to the blue keycard in the room below, then go down the steps to drop into that room - the key is protected by a baron of Hell, and taking it will open a chamber to your right holding imps and chaingunners. Leave the room by the south-east door and push past two chaingunners to some steps then go up and approach the lift directly ahead to get back to the large nukage pit.

Use caution when you return to the pit as an arch-vile and two or three cacodemons have been released into that area. Go to the south-east corner of the walkway to find a blue key door and pass through it, then go left or right at the junction ahead and push past some imps and zombies to a nukage pool with one or two cacodemons. Go through the doorway in the pool and collect the yellow keycard ahead, but use caution as two chambers containing revenants (and arch-viles on HMP or higher) will open to your left or right. Head back through the blue key door and walk forward until you see a teleporter on your right, which will take you back to the room with the high platform, then step on the lift at the north end of the room to go down to a crossroads. Head north from here and go down some steps at the hall, then head west past a couple of shotgun guys to find a "LOCK" panel being guarded by one or two revenants. Press the panel then go back to the crossroads and go west this time to a now-open door which leads outside, where two knights and some other enemies are waiting. Open either of the west doors to confront two revenants and one or two pain elementals, then go inside and flip a switch between the doors to lower the exit teleporter in the room behind you which is protected by two mancubi.

When you return to the large nukage pit after getting the blue key, a chamber with cacodemons will have opened. Go into that chamber and flip the switch here to lower a pillar holding a megaarmor.

The building in the middle of the penultimate area holds a BFG9000 and two medikits. In cooperative play, one or two arch-viles will appear in this area and you can reach the building using an arch-vile jump; in single-player there is no conventional way to get up to the building.