MAP21: Fire and Stone is the twenty-first level of Eternal Doom and was designed by Adam Landefeld. 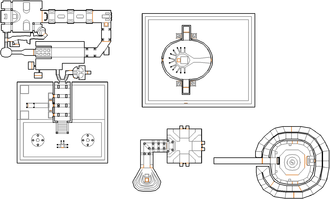 Map of Fire and Stone
Letters in italics refer to marked spots on the map. Sector, thing, and linedef numbers in boldface are secrets which count toward the end-of-level tally.

You start in a courtyard in front of a black/white switch with circles and a super shotgun. Press the switch twice to lower the stairs in front of you, and go down to a room with metal columns. There are three doors behind the western columns; two of them reveal sergeants and arachnotrons. Behind the middle one, there is a red switch that raises an invisible bridge leading to a stone switch in front of you. Wait until the bridge comes up, activate the stone switch and return to the room. Go through the newly opened passage at the other end and go through the staircase to your left, fighting imps, chaingunners and a baron on the top. Jump into the waterway and follow it to a small hallway behind the grey arch. Kill the chaingunner and the demon, and when you are on the other end, a small compartment will open in the middle of the hallway, revealing a revenant and a rocket launcher. Step onto the lift at the end to be taken to a big hallway with columns in the middle and some minor demons and zombies, but before you reach the middle of the hallway, the two smaller columns will lower revealing a chaingunner and a baron of Hell. Kill them and go through either side of the bigger column. As you enter this other room, a revenant and a pain elemental will appear. After you kill them, go behind the white altar at the end to get the blue skull key.

Go back to where the waterway begins, and go through the stairs on the right (east) at the beginning. Hit the switch to lower the fence and activate the blue skull switch on the right and the red switch behind to lower the walls around you, revealing a teleporter. As you get in the next room, several imps and spectres will attack you, so be ready. Now you are in a big room with a big brown column in the middle, surrounded by several smaller ones. If you look at the wall behind your entry point, you will see an eye switch. Hit it to raise a big section of the floor, leaving you inside of a hallway leading to a circular section with an arachnotron. Kill it and step into the teleporter. Now you are on the raised section of the floor. In the western part of the wall, there is a metal section. Activate it to lower a soul sphere. As you get it, you will fall outside the castle. Turn back and look at that "JUMP HERE" sign. Make sure you are in good health and armor, because you need an arch-vile jump to reach that switch. Hit it, and turn around. The fire and the arch-vile to your left have disappeared (this is the SE cage). Run into the cage to be teleported right in front of a switch (you will be attacked from behind). Hit the switch to reveal teleporters at the sides, which take you to the outside of the castle again. Look now to the SW cage, where the fire and arch-vile are gone too. Run to the cage to be teleported again, this time next to the compartment to the left of the first wooden switch. You are advancing counter-clockwise (look at the map), so repeat the procedure with the other two cages and arch-viles until you are teleported in front of the door. Activate the fence to lower it and go through the hallway. Be careful, because you will be attacked by chaingunners and a revenant. Now go through the teleporter at the end to be taken into a hallway that is actually a circular staircase, so fight your way to the top, until you see a box of rockets between two blue torches. As you take the box of rockets, the column in front of you raises, revealing a door that you cannot open yet. There are also two sets of stairs at your left and right. Go through either of them and once you reach the top, activate the stone switch. Come back down to where the door was and go through the teleporter to finish the level.

* The vertex count without the effect of node building is 2233.