MAP21: Gun Punishment is the twenty-first map of 32 in 24, a deathmatch megawad. It was designed by OobyDoo.

It was the author's second submission to the project, following Brown Building, and was the twenty-fourth map to be submitted, arriving over nineteen and a half hours into the session. According to the author, it took about one hour to build. 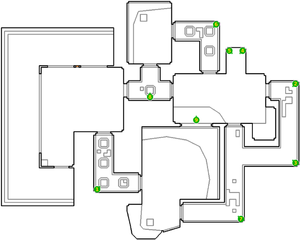 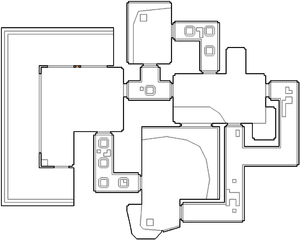 Gun Punishment shares many similarities with Brown Building, OobyDoo's other level for the project. The texture scheme is similar, the detailing ideas are re-used, and in general, the map layout features a number of separate outdoor areas connected by dark corridors in a brown building.

This time there are four outdoor areas. The smallest of these is in the north, and has two entrances from the smallest of the corridors. This area contains only a single medikit and some shotgun shells. The eastern outdoor area is slightly larger. More shotgun shells can be found here, as well as three stimpacks. A small annex in the north of this area is used for two spawn points, and a short cliff along the south wall of the area is used for a third spawn point. This area has four entrances, two of which are the small corridors that also allow access to the northern area, whilst the other two entrances are actually from two corridors joined together to form the largest indoor area. Although this indoor area is large, it only contains some more shotgun shells, as well as some spawn points.

The western outdoor area is the largest, and can be entered from the medium-sized corridor connecting to the southern area, or the small corridor connecting to the north and east areas. This area contains a megaarmor, as well as more health and shotgun ammo. The megaarmor is on top of a platform in the south-west corner of the area. In order to get it, players must press a switch along the north wall to lower the platform. If the player stands on the platform when it rises, it is possible to run over the top of the wall surrounding the area - there is no way to get back if this happens.

Apart from the pistol and fist, the super shotgun is the only weapon available in this map.

This level contains nine spawn points, most of which are in close proximity to, but not placed upon, a super shotgun.