MAP21: Hell's Gate is the twenty first map of Perdition's Gate. It was designed by Jimmy Sieben (Evil Genius).

Plot: You step off the teleporter to find yourself deep in Hell. Now all you have to do is fight your worst nightmares. 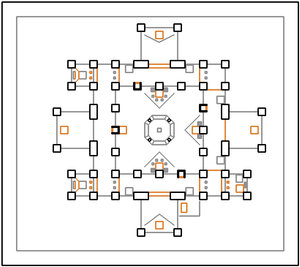 Map of Hell's Gate
Letters in italics refer to marked spots on the map. Sector, thing, and linedef numbers in boldface are secrets which count toward the end-of-level tally.

You begin this map on the west ledge of a large pit seemingly floating in the middle of nowhere.

Deal with the two revenants around the corners in front of you and then run back over the teleporter you start the map on top of, to be sent to the west side of the pit in the middle, where several imps and a couple of arachnotrons greet you.

Use the teleporter on the east side of the pit to be transported up to the east side of the ledge where you can find the blue key. A few bad guys teleport on to the podium in the middle of the pit, though they are there to distract you from the arch-vile that also teleports into the pit and will likely be to your side when you go back down there.

Head back down into the pit and take the west teleporter back to the west ledge and travel to and press the switch behind the blue bars in the north west corner. A Hell knight will rise up to try to stop you.

This will open the north teleporter in the pit, which will take you to the north ledge and the yellow key. Bars will lower as you approach the key connecting the left, right and north ledge together. Head to the yellow bars in the south west corner.

The switch inside, again guarded by a hidden Hell knight, will unblock the south teleporter in the pit which will take you up to the south ledge and the red key.

Approaching the key will lower bars and connect the south ledge to the other ledges. With the red key head to the south east corner and open the red bars. Behind which is the exit guarded by a hidden baron of Hell.

One can cause the hidden Hell knights and baron of Hell to appear by simply approaching the bars, without having to open them, allowing one to shoot them through the bars in reasonable safety.

* The vertex count without the effect of node building is 619.