MAP21: Indigestion is the twenty-first map of Going Down. It was designed by Cyriak Harris (mouldy), who also composed the music track, "Zombie Maggots in the Flesh Cathedral." The map contains no weapons in single-player, only berserk powerups, forcing the player to complete it under the stipulations of a UV Tyson run. 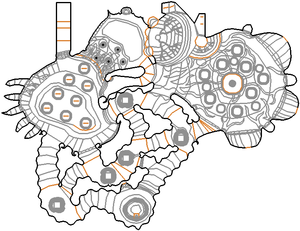 Map of Indigestion
Letters in italics refer to marked spots on the map. Sector, thing, and linedef numbers in boldface are secrets which count toward the end-of-level tally.

* The vertex count without the effect of node building is 5358.