MAP21: Intergalactic Delivery (in Vanilla ports, named simply "Delivery" on the automap) is the twenty-first map of 1000 Line Community Project. It was designed by Walter Confalonieri (daimon) and uses the music track "Lunar Outpost" from Descent. 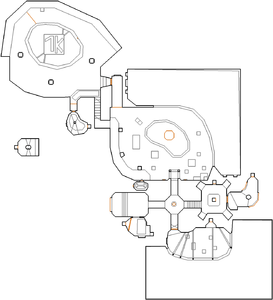 Map of Intergalactic Delivery
Letters in italics refer to marked spots on the map. Sector, thing, and linedef numbers in boldface are secrets which count toward the end-of-level tally.

Pass the zombiemen and shotgun guy in front of you then head straight forward to a four-way junction with a rotating column. Turn right (south) and open the door ahead to find a storage area with imps and a chaingunner, then step on the teleporter in the north-east corner to enter a small chamber containing armor and the red keycard. Watch out for the imp and shotgun guys that appear in front of you as you enter the chamber, and for an arch-vile that teleports into the storage area when you return there.

Go back to the four-way junction and head down the east staircase to a water-filled room, press the button on the center column then quickly return to the junction and run north to a lift before it rises. The lift will take you up to a second storage area with more zombies - go to the north-west corner to find a chaingun next to a red key door, then go through the door to a large hall with shotgun guys and a cacodemon at ground level, plus Hell knights and barons of Hell on an overhead ledge. Run west and north around the low circular wall until you reach a pillar holding the yellow keycard; this will cause a button to appear on the north-east side of the circular wall, which will lower that pillar when pressed.

Go back to the water-filled room and open the yellow key door to confront a revenant, then follow the path past some chaingunners and imps to a teleporter. Step into the teleporter and kill the demon and other monsters in front of you, then go through the door and prepare to kill three imps that appear in front of you. Head up a blue staircase to a ledge overlooking the large storage area and follow this round to the exit door, open it and kill the waiting revenant then press the button to finish the level.

A rocket launcher and six boxes of rockets can be found by the south wall of the yellow key hall.

The door to the south storage area is unlocked on its north side, but is locked with the red key on its south side (so that players cannot return to the starting area without that key). Because the door is only eight units thick, the arch-vile that teleports in can open the door by bumping into it. This has minimal effect on gameplay as the player will open that door a short time later, but potentially allows the arch-vile to travel further north than expected.