MAP21: Jungle Fever is the twenty-first map of 32in24-5, a deathmatch megawad. It was designed by Sarah Mancuso (esselfortium) and Mephisto, and uses the music track "My Spirit Will Go On" by DragonForce, sequenced to MIDI by Knightrider of Doom. 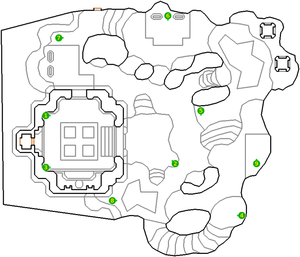 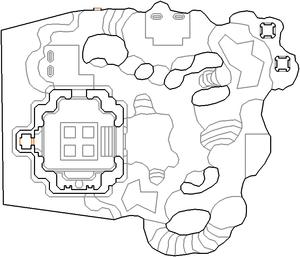 This is a small, compact map, with a loose ruined theme. The main feature is the building in the west of the map, which houses the exit room and the plasma gun, which is atop a raised pillar which is lowered by a switch to the north of the building. The distance players must run from the switch to the platform is about 1500 units. The rest of the map is a rocky outer rim, starting at the north side of the map and travelling clockwise to the south-east, with several connections to the small area around the building's exterior. Chainguns can be found in the north and south-east sections of the outer rim, with a green armor available next to the latter. The outer rim rises in elevation as it travels from north around to the south-east. A small passage can be found in the south, with stairs leading up the outer rim, providing access from the far end of the map.

This level contains nine spawn points, all of which spawn with, or close to, a super shotgun: