MAP21: Lunar Mining Project is the twenty-first map of PlayStation Final Doom and is the eighth level of the TNT episode. It is based on the PC version of MAP23: Lunar Mining Project (originally designed by Paul Turnbull for TNT: Evilution) as an adaptation with colored lighting applied and some simplifications done on level geometry, texture set and monster types count. Changes for the PlayStation port were authored by Tim Heydelaar.[1] It uses the music track "Breath Of Horror" by Aubrey Hodges. 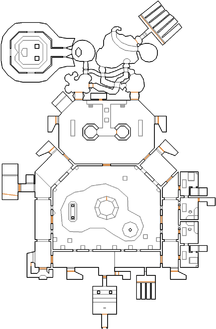 Map of Lunar Mining Project
Letters in italics refer to marked spots on the map. Sector, thing, and linedef numbers in boldface are secrets which count toward the end-of-level tally.

Go back to the hallway you were in a moment ago and go north through two more doors, arriving in a room with a large desk (the red keycard sitting on the desk is not required to complete the level). Go to the north-west corner of the room and take the lift down to a rocky cavern. Activate another lift on the east side of this room which will take you to a higher tunnel, then follow this tunnel and jump over two holes until you drop into a large cavern with a nukage river. Cross this river and take the blue keycard.

Now backtrack to the start of the level (watching out for numerous monsters that teleport in or appear from alcoves) and open the exit door. Kill the chaingunners and revenant in the exit room (if you are playing on Hurt Me Plenty or Ultra Violence skill levels), then press the switch at the south end of the room to finish the level.

The red keycard found in the northern room, behind the yellow doors, is used to access the outdoor area in the center of the level. Here you can find a rocket launcher at the top of the circular staircase in the nukage pool, as well as a super shotgun between two brick pillars.

* The vertex count without the effect of node building is 1303.