MAP21: Mt. Erebus is the twenty-first level of console versions of Doom, based on the original E3M6: Mt. Erebus with modifications made to adapt to the consoles' limitations. It was converted by American McGee and originally designed by Sandy Petersen. The map first appeared on the Atari Jaguar, and was later ported to the 3DO, Game Boy Advance, Sony PlayStation, and Sega Saturn consoles. 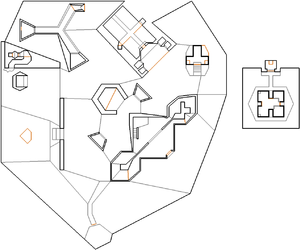 Turn right and head over the lava pool to the next platform. Once across, turn left to see a marble brick building in front of you. Head towards this building - on I am a Wimp and Not Too Rough skill levels, the blue skull key is located in front of the door to this building, allowing you to go straight to the level exit. On Hurt Me Plenty and Ultra Violence, you will need to explore more of the level to find the blue key.

Hurt Me Plenty and Ultra Violence

Go through the door into the marble brick building and kill all the enemies inside. Look at the south-west wall and you will see a candle between two small staircases; open the wall behind the candle to reveal a teleporter and step through it. You will find yourself outside a square brick building - go round to its east side and press the gargoyle switch in the alcove which will let you inside. Press the switch directly ahead of you to open a metal wall behind you, revealing the yellow skull key.

Take the key and go back outside. Go to the north side of the building and open the yellow door, then go through the teleporter behind it. You will be inside a Y-shaped building - turn around and follow the path to a fork, and two doors will open in front of you revealing enemies. Go down the left-hand fork and kill the enemies guarding the blue skull key, then go down the right-hand fork and kill the enemies blocking your way to a switch. Press the switch and return to where you started; a wall has lowered allowing you to get out of the Y building.

If you found the blue key in front of the marble brick building, head due west until you see a brick building in lava next to a metal structure. If you found the blue key in the Y building, then head south and west around this building once you get outside it. Drop into the lava and head towards the brick building; as you approach, you will see some nukage on the floor leading inside the metal structure. Follow the nukage to a blue door, go through it and continue on to the exit door. Go through this and step on the teleporter pad to finish the level.

* The vertex count without the effect of node building is 479.