MAP21: One Flew Over The Caco's Nest (Alien Vendetta)

MAP21: One Flew Over The Caco's Nest (called One Flew Over the Cacos Nest [sic] on the intermission screen) is the twenty-first map of Alien Vendetta. It was designed by Pablo Dictter and uses the music track "Grove" from Hexen. It was one of the few maps to remain unchanged from the first release to the second. The par time defined in the executable is 4:40.

The title of this level is a pun on the title of the novel One Flew Over the Cuckoo's Nest by Ken Kesey (made into a Broadway play in 1963 and a film in 1975), and the name of the Cacodemon. 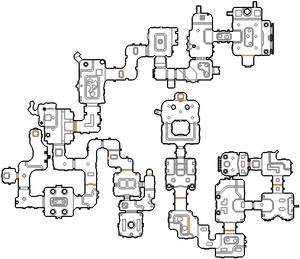 Map of One Flew Over The Caco's Nest
Letters in italics refer to marked spots on the map. Sector, thing, and linedef numbers in boldface are secrets which count toward the end-of-level tally.

In the first part, if you stand under the descending bars (sector 347), they will not go down anymore.

Grab the chaingun here, looking out for the cacodemons which arise from the blood pool. Follow the next hall until you find a super shotgun. The nearby switch will lower it. Keep on going down the linear path. When you find a fork, go left, as right requires the red key. To open the big faceted wall, hit the nearby switch to lower it. In the next room with the pain elemental, hit the switch sitting there to open both of the doors. Make your way to the bend of the hallway. Turn around and hit the switch to lower the nearby bars to the red skull key. Now backtrack to the red door and go through it, following the path all the way to a red symbol on the wall and a teleporter pad with candle on it. From here it is just a very linear path to the exit.

* The vertex count without the effect of node building is 3915.