MAP21: Passage to Exile is the twenty-first map of Doom 2 the Way id Did. It was designed by Brendt Pantley (Megalyth) and Michael Fraize (Marcaek). The par time defined in the DEHACKED lump is 2:30. 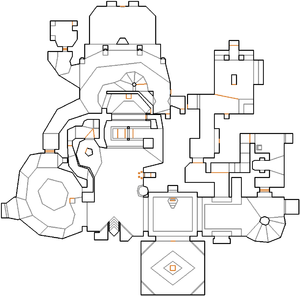 Map of Passage to Exile
Letters in italics refer to marked spots on the map. Sector, thing, and linedef numbers in boldface are secrets which count toward the end-of-level tally.

A hanging leg (Thing 264) in the east has no flags set for any of the three difficulty classes, so it does not actually appear in the level.