MAP21: Pitfalls is the twenty-first level of Doom 64, designed by Tim Heydelaar. This is one of the darker levels of the game, with the eerie music track "Perfect Hate" characterized by deep howling, high-pitched orchestral music, and insect buzzing and a dark, scary atmosphere. 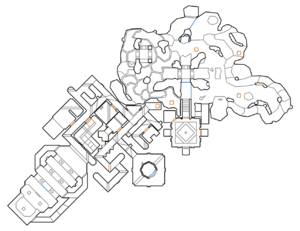 Map of Pitfalls
Letters in italics refer to marked spots on the map. Sector and Thing numbers in boldface are secrets which count toward the end-of-level tally.

The first part of the level is suggested in the name, as there is a great cave with a huge pit of lava in the middle. The player has to find their way over the pitfalls while battling imps and cacodemons. The second part of the level consists of dark hallways with strange rooms, ending up with a bigger shrine-like room where a skull key may be found. Going back and forth through this level is only made worse by monsters jumping out at you in the hallways, and new sections in the caves opening, releasing new waves of monsters. To exit the level, a multi-colored gate in the hallways must be opened and the player has to jump down one last pitfall.

* The vertex count without the effect of node building is 1427.