MAP21: Sinners' Woods is the first bonus map of Rowdy Rudy II. It was designed by NeedHealth and uses the music track "". 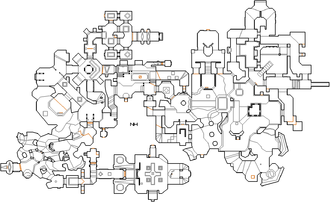 Map of Sinners' Woods
Letters in italics refer to marked spots on the map. Sector, thing, and linedef numbers in boldface are secrets which count toward the end-of-level tally.

It is possible to get stuck inside Secret #1 once you get inside it. The two inner walls of the secret can be lowered again, but only once, and if the player is to stay inside the secret after triggering both walls, he or she will not be able to leave the sector.

* The vertex count without the effect of node building is 3777.