MAP21: Slayer is the twenty-first map of The Plutonia Experiment. It was designed by Milo Casali. Like Doom II's MAP11: Circle of Death, the center of the level is a raised walkway ring, but otherwise the setup is not related. 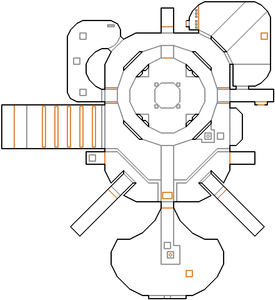 Map of Slayer
Letters in italics refer to marked spots on the map. Sector, thing, and linedef numbers in boldface are secrets which count toward the end-of-level tally.

As soon as you get the red key, the walkway will lower back towards the lava floor. Jump down to the lava, run towards the closest lift and return to the walkway. Return to the area with the red door and activate the switch behind it. Be careful as multiple enemies will be teleported, including an arch-vile. Run towards the southern end of the walkway, enter the room there and exit.

* The vertex count without the effect of node building is 390.