MAP21: The Unholy Cathedral is the twenty-first map of Deus Vult II. It was designed by Huy Pham (Doom Marine) and uses the music track " ". The par time defined in MAPINFO is 4:00. 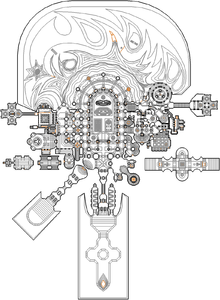 Map of The Unholy Cathedral
Letters in italics refer to marked spots on the map. Sector numbers in boldface are secrets which count toward the end-of-level tally.

Suicide Exit: In the East Library section of the cathedral, after getting the chaingun on the pentagram, move up the stairs to the south. The fire on the southern end of these stairs is the exit and you can slide under by hitting the wall to the north with rockets until you slide under (or you can use the monsters nearby).

* The vertex count without the effect of node building is 22284.