MAP21: Todofina is the twenty-first map of Plutonia 1024: The Plutinya Experiment. It was designed by Phml, and the par time defined in MAPINFO is 4:00. 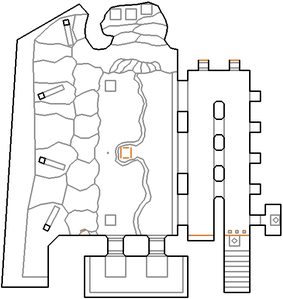 Map of Todofina
Letters in italics refer to marked spots on the map. Sector, thing, and linedef numbers in boldface are secrets which count toward the end-of-level tally.

Take the backpack and weapons to your right then follow the corridor until it makes a U-turn (there is a supercharge here on Hurt Me Plenty (HMP) skill level or lower). You will see a group of revenants and Hell knights in front of you - fight your way past them to the door at the end of the corridor and try to open it, which will cause some walls behind you to lower, then go to the north-east corner and kill any chaingunners that teleport in (along with an arch-vile on HMP, or two on Ultra-Violence (UV) and Nightmare (NM)) before shooting the skull switch that has been revealed in the north wall. This will lower some more walls to the west holding shotgun guys, allowing you to go outside and find the yellow skull key which is overlooked by four mancubi.

Stepping on the yellow key (it does not need to be picked up) will cause a gang of imps to teleport to the north ledge, while cacodemons fly through the windows in the south wall; demons will also teleport in from the east side of the map. Fight your way back to the skull switch you shot earlier, then shoot a second switch that has been revealed next to it; this will lower a pole outside holding the red skull key, but on HMP or higher you will have to get past two cyberdemons to claim it. With the red key, go back to the starting point and kill three arch-viles that have appeared behind the red bars here (except on HMP), then open the bars and step through them to end the level.

Stepping on the yellow key also causes various items to appear in the level - a supercharge and megasphere will appear on the teleporter pads in the water, while two energy cell packs and a BFG9000 will appear on the teleporter pads on the east side of the map. On UV and NM, the megasphere is replaced with a supercharge and the BFG is replaced with a plasma gun.