MAP21: Twilight Lab is the twenty-first level of Memento Mori. It was designed by Andy Badorek and uses the music track "Mummy Rags" by Mark Klem. This level was first created by Badorek in 1995 as a standalone level, TWILAB.WAD; the Memento Mori version features several modifications for cooperative multiplayer gameplay. 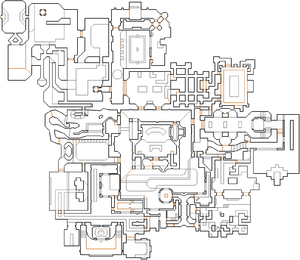 Map of Twilight Lab
Letters in italics refer to marked spots on the map. Sector, thing, and linedef numbers in boldface are secrets which count toward the end-of-level tally.

Get off the silver platform and mow down all the shotgun guys, chaingunners and imps in this room. Make your way around the computer panel and enter the door ahead. take out the group of three imps and two chaingunners, then flip the switch behind them to lower a lift on the other end of this room. Ride this room down to the "central walkway". Flip a switch next to the lift to lower walls ahead, revealing the blue key in a distant room.

Follow the central walkway around to the north side, where there is a pair of doors. The sign should read "central computing/crusher/outdoor facilities". Head through the door and cut down the cannon fodder in this room. Lower the metal wall on the west to reveal a large number of shotgun guys and chaingunners - a well timed rocket or two should do the job. Don't go through the door ahead - instead, flip the switch to its left to lower the circular obstacle in the corridor.

The next area is a crusher puzzle. Several mancubi roam a red coloured floor. In front of you are several teleport pads, alternately red and white. These teleport pads don't actually teleport you, but instead control the crusher area. Since the red key is also hidden within this area, controlling the crusher correctly is essential. To clear this area with a minimum of health loss:

Continue through the door in the north. Follow it around and pick off the imps in this room, being careful of a nook with a couple of shotgun guys inside. Once you reach a pair of brown doors, Go through the southern one, then the one in front of you. Clear out more imps and flip the first switch panel on the west wall to lower the red key to the floor. Backtrack to the crusher (going out through the wall opened by the switch in the south restarts the crusher) and pick up the red key safely.

Backtrack to the central walkway. Find the red door in the east, and go through it. Open the brown wall ahead of you, and clear this room's cages of imps. On Hurt me plenty and above, there are two Hell knights on an upper platform as well. As you proceed forward, you can ignore the toxic pit if you are looking for speed or survival - just stay on dry land and follow the corridor around, killing any curious monsters from the slime area as they arrive. Once you get closer to the metal wall, it begins lowering. Ride the platform that is revealed all the way to the top (the correct alcove is in the southeast corner).

Once you reach the top, kill the shotgun guys waiting in ambush. As you continue forward, beware of a nasty trap that opens, releasing a demon in front of you and up to four demons behind you. Enter the metal door and drop down from the ledge into a small crate room with imps and demons. Take either door in the south to enter a larger crate room with more opposition. To leave this crate room, you need to:

Exit through the door, then drop down the ledges to come to another door. Kill the mass of former humans here, then find the only non-blue-locked door in the northwest. Use the sides of the pedestal the blue key is on to lower it to the ground for collection.

From the blue key room, drop into the water through the windows. Find the metal strip on the wall and use it to lower a lift to a high ledge. From this ledge, run back onto the central walkway.

Your next destination is the blue door in the west of the central walkway. Go through it to a stone-walled room with a slime pool. There are some up to four cacodemons (six on co-op) to handle in this room. Walk around the slime pit on the stone walkway and stairs will rise up in front of you. Go up the stairs to an alcove with a switch. Flip the switch and the wall will lower, revealing a new room (on Ultra-Violence, there is a revenant in here). Directly facing the switch in the west wall, walk east towards it to lower a wall in this room and reveal an alcove opposite with pain elementals and lost souls. Flip the switch to raise a bridge to the alcove. Cross the bridge and flip the switch in this alcove to acquire the yellow key.

From the bridge, drop down to the south and re-enter the blue door. This time, go through the door in the southwest corner. Follow the blue lights on the floor south to a pair of doors, then east. Open the first of three small doors on your right.

This room has a U-shaped walkway, some cacodemons, and on Ultra-Violence and above, a pain elemental. Once you've taken out the monsters, drop into the water and press use on the yellow bar in the water. This unlocks the exit room. Lower the walkway around you to get back up, then exit the room.

Back in the hallway, notice that the centre door of the three small doors is now open. Step into the hole in the floor in this room to exit the level.

From the pair of doors in the north of the central walkway, enter the room ahead and walk into of the dead-ends formed by computer panels on the east side. Lifts will lower, taking you into a red-floored maze filled with former humans, lost souls and demons. At the far east of the maze, one corridor contains a drop trap, lowering the floor into an ambush with two shotgun guys. From there, lower either metal panel in the corridor to access the Central Computing room. The ledge has some shotgun guys. Try not to fall off the ledge unless you want 100% kills - to get back up, you will have to lower the ledge, which in turn releases numerous cacodemons and pain elementals.

To exit this area, leave by the metal panel in the southwest. In this next corridor, you can lower the western metal panel to be lifted back into the southeast corner of the red-floored maze, or lower the southern panel to be taken to a red door, which leads you to the area just behind the red door in the central walkway.

This area can be accessed either by going through the small door in the northwest of the central walkway and ascending the staircase (run across the final gap), or by opening the metal door just before the crusher area and taking the lift up. Make your way to the platform in the west with a baron of Hell or two, and step on the platform to lower a wall behind. This new passageway leads to a stone-walled indoor room with an arachnotron (two on Hurt me plenty and above). Flip the switch on the west wall to lower part of the east wall, then run through that gap to acquire the previously unobtainable soulsphere.

* The vertex count without the effect of node building is 2294.