MAP21: Undead Nation is the twenty-first map of Community Chest 2. It was designed by Draconio, and uses the music track "Dark Halls" from Doom. 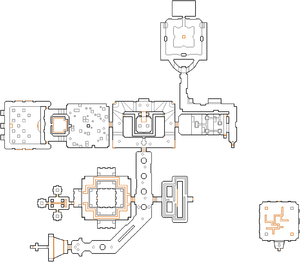 Map of Undead Nation
Letters in italics refer to marked spots on the map. Sector, thing, and linedef numbers in boldface are secrets which count toward the end-of-level tally.

Lower the lift and prepare to fight imps, shotgun guys, and zombiemen in this rectangular hallway. Then head west to a cargo room. Keep heading west watching for enemies behind crates until you find the room with the red key. Acquire it using the lifts, then go back to the rectangular hallway. Your next destination is the south door. In this huge hallway, there are two barricades. One barricade can be opened by progressing through the left-hand door. You will have to wade through nukage to reach the switch which raises it. The right-hand door has a large computer room with platforms that go up and down. A switch is on the western side of the central structure which removes the other barricade. You do not have to open both of them, but you can if you want to. Proceed down the hallway to the room with the yellow key and the super shotgun. Go back to the rectangular hallway, as your next destination is the yellow door on the eastern side. If you are not getting secrets #6 or #7, be careful when going back, as the barricades are now crushers. Past the yellow door, climb the steps and go left past the next door down a hallway until you reach a room where the blue key is located. After grabbing it, you will have to deal with demons going back towards the blue door. Take the teleporter past the door and you will end up surrounded in a marble area with Hell knights and demons as you walk back. Press the switch on the wall to eventually lower the pentagram-faceted walls to the exit.