MAP22: Arachnophobia is the twenty-second map of Requiem. It was designed by Iikka Keränen, and uses the music track "Reason for Nothing" by Mark Klem. 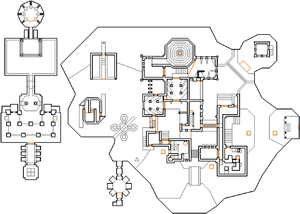 Map of Arachnophobia
Letters in italics refer to marked spots on the map. Sector, thing, and linedef numbers in boldface are secrets which count toward the end-of-level tally.

As the name of the map indicates, there will be a lot of arachnotrons on this map. There will also be a spider mastermind at the very end.

Kill the imps and chaingunners at the start and cross the bridge. Kill the arachnotrons and go left under the building to the door on the staircase. Open it and grab the super shotgun inside, then take the door opposite of the blue door. You will see a revenant on the platform. Kill him and head downstairs, then use his platform to lower it. Now press the up switch to raise it up, then sidle along the wall to the switch. After pressing it, drop down and go through the bars to a pit where you will pick up the blue keycard. The teleporter will take you to a small mine shaft with a plasma gun. Enter the shaft and it will slowly lower, revealing imps to you as you descend down. When you are at the bottom, grab the rocket launcher and head back outside. Go around the structure to the red building to the west and find its entrance. Enter it, then grab the megasphere to warp to the top. Lower the door here, then face north on the walkway and jump to the marble building. When you make it you will be confronted by several arachnotrons, so grab the BFG9000 and quickly kill them. Press the switch here to reveal a revenant and another switch.

Pressing the switch opens the gate back to the plaza you were in just before the small room with the super shotgun. Reenter this room and take the blue door now. Kill the arachnotron (or Hell knight on Hey, Not Too Rough or lower) then head out to the balcony and cross the bridge to the other building. Open the eastern door in the next room to head onto balcony level outside. You will need the red key to open the nearby door, so pass under the blade trap here and open the next door. Climb down the stairs shooting barrels that will likely kill the monsters in this room. Pass under the bridge and use the lift to rise up to the corridor. Go north towards the yellow door, and the door right next to it holds the yellow keycard. Do not head through the nearby yellow door yet, instead go south along the corridor to the yellow door, and open this door to find a room with a switch. Hitting it lowers the bars south of this room, which is a cargo bay. Kill the monsters here as you weave through the crates to the door leading back outside. You will find a teleporter here, as well as a few monsters on the other end where you will end up should you use the teleporter. Kill the monsters before teleporting and then teleport over there to find a switch. Press it and then return all the way to the corridor, opening up the yellow door that leads outside now.

Once outside, there should be a lift to use to the northeast. Use it to ride up to the small hut where you will find the red keycard. Look out for the arachnotrons as you get out of this area, then return to the red door. Open it to find a mancubus or two in the next room and then open the door behind them. The next room has several monsters and a barred staircase. Hit the switch here to remove the bars, then proceed downstairs. Kill the arachnotrons as you enter the black column in the red room to teleport to a different part of the map. From here, all you need to do is head all the way north to find the exit, but it is guarded by the spider mastermind, so watch out for it at the end.

Due to the way in which the level's REJECT lump is composed, all monsters in sector 293 will be unable to detect your presence, even if you are standing right in front of them, and will not move until they are attacked. Furthermore, all actors standing in this sector are immune to blast damage. Whether this was intentional or not is unknown.