MAP22: Atomic Garden is the twenty-second map of Plutonia 1024: The Plutinya Experiment. It was designed by Ilya Lazarev (joe-ilya) and uses as its music track a MIDI version of "Junkhead" by Alice in Chains from Dirt, based on un42 and modified by 4mer for the Plutonia: Revisited Community Project. The par time defined in MAPINFO is 2:30. 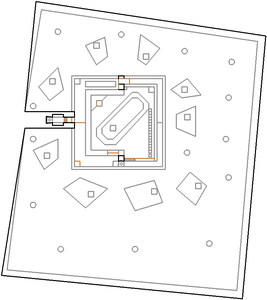 Map of Atomic Garden
Letters in italics refer to marked spots on the map. Sector, thing, and linedef numbers in boldface are secrets which count toward the end-of-level tally.

Kill one or two zombiemen in front of you, take the backpack and chaingun to your left then follow the walkway round (collecting a super shotgun on the east side as you go) until you reach a Hell knight guarding a skull switch. Press the switch then head back to the starting point, dodging fireballs from imps that have appeared on the outer islands, and walk through the wooden barrier that has lowered to enter the central garden. A group of cacodemons and knights will teleport to the nukage pool in the garden; use the megasphere, rocket launcher and plasma gun in this area to help you kill them, then go to the metal pillar in the north-west corner and press the gargoyle switch on its west side. This will raise a set of narrow steps on the east side of the garden, which you can run up to get the yellow skull key.

Open the yellow key door on the south side of the garden and kill one or two imps waiting behind it, then step through and proceed with caution - a group of revenants, imps and spectres are waiting round the next corner, and after those you will encounter chaingunners and an arch-vile protecting another skull switch. Press this switch to open a door on the west side and release another arch-vile (plus another spectre on Hurt Me Plenty skill level, and a demon on Ultra-Violence and Nightmare), then go through the door to end the level.

* The vertex count without the effect of node building is 646.