MAP22: Bite is the twenty-second map of the second episode of Back to Saturn X. It was designed by Matt Cibulas (RottKing) and uses the music track "Lurking," composed by Sarah Mancuso (esselfortium). In the official add-on version, this level's name is Chomp. 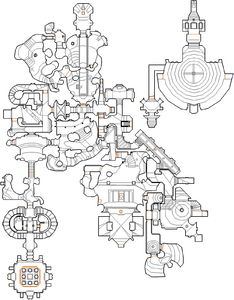 Map of Bite
Letters in italics refer to marked spots on the map. Sector, thing, and linedef numbers in boldface are secrets which count toward the end-of-level tally.

The teleporter behind the red door area is a point of no return, and the subsequent part of the level contains no secrets. So all secret hunting should be done before taking this teleporter.

* The vertex count without the effect of node building is 4849.