MAP22: Black Rabbit is the twenty-second map of Sunlust. It was designed by Zachary Stephens (Ribbiks), and uses the music track "Snow Battle" from Dragon Force, sequenced by SilverKnight. 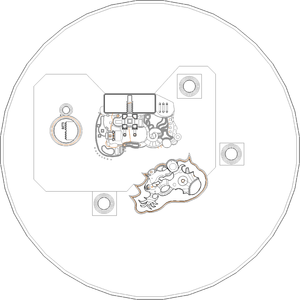 Map of Black Rabbit
Letters in italics refer to marked spots on the map. Sector numbers in boldface are secrets which count toward the end-of-level tally.

Caution: Once you hit the blue and yellow switches to lower the wall leading to the exit, you will no longer be able to get any of the secrets mentioned below as you will be locked inside the main central arena with no way to escape.

Two multiplayer-only supercharges (Things 255 and 256) have no flags set for any of the three difficulty classes, so they do not actually appear in the level.