MAP22: Burnt Offerings is the twenty-second map of Doom 64, designed by Randy Estrella. The level takes place in deeper in Hell, with a black sky and forever-burning red flames. It uses the music track "Hellistatic", also heard in Level 5, Tech Center. The stage consists of a large cathedral like place surrounded by a courtyard with a altar covered in candles, various areas infested with arachnotrons and also fighting large amounts of spectres and Hell knights. 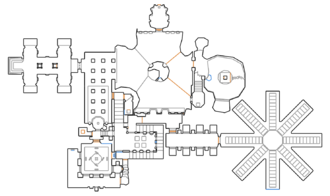 Map of Burnt Offerings
Letters in italics refer to marked spots on the map. Sector and Thing numbers in boldface are secrets which count toward the end-of-level tally.

You begin in a small alcove that barely conceals you from an arachnotron inside a guard post. Take the arachnotron out, then head to the area directly to the left and take out the couple of lost souls. There is a switch on an island surrounded by a partially filled water reservoir. Walk around the edge of the reservoir to the stepping stones to get to the switch. Once you set foot on the island and collect the armor powerup, a cache will open up on the other side of the reservoir unleashing a couple of cacodemons. Take them out, activate the switch, and go into the cache and collect the bullets and medkits if you can. If you fall into the reservoir on your way out, there's a patch of land that acts as an elevator to bring you back up to the ground level.

The aforementioned switch raises stairs into the guard post where you killed the arachnotron, and in the post sits a super shotgun on the pedestal. Pick it up if you can, then head into the open grounds on the right. Take out the nightmare imps in the fortress above you on the left. Running into each corner of the grounds will cause several arachnotrons and pinkies to appear. Take them out before they overwhelm you, then head into the dark corridor with all the columns.

Many spectres lurk in the columned corridor for you to dispatch. At the far end of the corridor is a small green radiation pit with a mega sphere in the middle (see secret 1). Go into the door that's on the left corridor wall facing the grounds. Kill the nightmare imps as you head down the stairs. When you get to the large room with a blue alcove on your right and the off-looking red door in front of you, turn left and activate the switch at the far wall. Quickly run to the other side of the room as four columns plunge into the floor from above, then raise back up to reveal four Hell knights for you to dispatch. This also causes the odd red door to open up for you to go in and head up the stairs encircling the previous large room, killing the nightmare imps and cacodemons along the way. Go back to the second flight of those stairs and activate the switch along the wall, and then run to the top of the last flight to hit the second switch next to the momentarily open wall to drop the blue skull key long enough to obtain.

Backtrack to the blue alcove and head up the stairs to go into the blue door into the courtyard beyond. A few arachnotrons will be lurking in the walls around the courtyard that you'll need to neutralize first. In the middle of the courtyard are stone barriers surrounding a rocket launcher. Getting close enough will cause the barriers to lower into the floor, however, hidden in the wall to your left is a switch that will cause the barriers to raise. This protects you from the dart trap that immediately springs up around you after collecting the rocket launcher and spares you from taking damage. The door at the opposite end from the blue door will open up. Go inside and follow the right hall around to a switch to press, then follow the hall back around to the left and hit the other switch. There's a secret just to the right of this switch inside the wall (see secret 6).

That last switch you activated opens the chapel area located in the dark columned corridor. In the chapel area you will be confronted by nightmare imps and cacodemons in hidden alcoves above you. Take them out, the progress further into the chapel where you'll repeat taking out the same monsters again along with an arachnotron before collecting the yellow skull key in the shrine. Upon collecting the key, arachnotrons will appear and block your exit path. Take them out and head back though the dark columned corridor into the door on the left wall facing the open grounds, back down the stairs through the large room, up around the flights of stairs by where you got the blue skull key, then go right down the hall past the open balconies, but as you do so, cacodemons will appear in the open grounds. Take them out, and head for the yellow door.

Inside the yellow door is a prison block with arachnotrons in the hallway and shotgun guys in the cells. Kill them all and collect the soul sphere, then head into the door on the far end.

Inside this door is a large room with several branching caches resembling a star of sorts (when looking at it from map view). In the middle of the room sits the red skull key, and as soon as you collect it, walls from each cache will close in on you quickly, the entire room will shake, and a switch will appear that you'll need to press to make one of the walls drop temporarily for you to escape before the ceiling comes down and crushes you. A Hell knight will appear in each cache. Take them all out, and head for the furthest cache from the entrance to the star room. There will be a switch you'll need to activate in order to open up the entrance to get out of the room. Then head back to the open grounds once again.

The last onslaught of arachnotrons will be waiting for you in the open grounds. Take them all out, then head into the red door, kill the last couple of arachnotrons, and activate the switch to end the map.