MAP22: Caverns of Despair is the twenty-second map of the Newdoom Community Project. It was designed by James Denny (DooMGoaT). 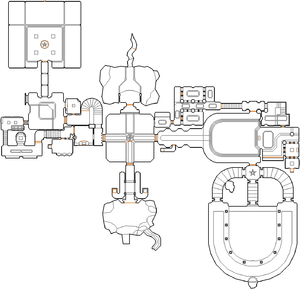 Map of Caverns of Despair
Letters in italics refer to marked spots on the map. Sector, thing, and linedef numbers in boldface are secrets which count toward the end-of-level tally.

Emerge from the nukage river into a rocky area and go through the door. There are windows with imps to your sides, which are secret sectors for later should you care for the secrets in this map. Go north into a hub with a plasma gun in the center. Go left and follow the route ignoring the red door. Go north in the room with the nukage. Through the tunnel is the red skull key, but it traps you in an arena with several big monsters. Press the north switch to leave. Head back to red door you previously ignored, then enter it and press the switch to lower the nukage in the following room. Go down there, entering the door and following the path to two doors. Take the one straight ahead and flip the switch on the computer. This removes the bars so you can leave this area and go back to the hub. Now take the other door to teleport back to the room with nukage basin and return to the hub. Go through the red door on the east side, finding yourself on a U-shaped balcony overlooking a lava pool. You have to go left as the right door requires the blue key. Follow the hallway left to a switch which opens various room. Return to the door where you entered this area and the right passage should be open, leading to the metal room behind the lava pool. The switch here raises ground behind you, so hit it and go up to the next room. The switch in this room reveals revenants and the blue skull key. Nab the key and take the blue door in the room. The teleporter here takes you back to the U-shaped hallway, where you can take the right path to the blue door here. You will find a big rocky room here with a U-shaped balcony, and a switch in the middle. Hitting this switch reveals two arch-viles and the yellow key. Once you grab the key, go back to the hub, and the yellow door should be accessible to the north. It is just a simple path to the exit.

* The vertex count without the effect of node building is 2712.