MAP22: Court of the Crimson is the twenty-second map of Beta 64. It was designed by Antnee. 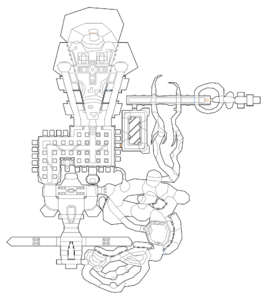 Map of Court of the Crimson
Letters in italics refer to marked spots on the map. Sector, thing, and linedef numbers in boldface are secrets which count toward the end-of-level tally.

Secret exit: After getting past the fake exit trap with the Hell knights, you will see a lift with a switch to go to the exit teleporter. Take it but instead of going through the teleporter, make your way back to the bridge, which will cause pain elementals to spawn. From here you will see that a teleporter has opened to your left, in the river of magma. Enter it to be taken to MAP30: The Beyond.

* The vertex count without the effect of node building is 2947.