MAP22: Diminished Apparatus is the twenty-second map of Claustrophobia 1024. It was designed by Brett Harrell (Mechadon), and uses the music track "Squar" by James Paddock (Jimmy). 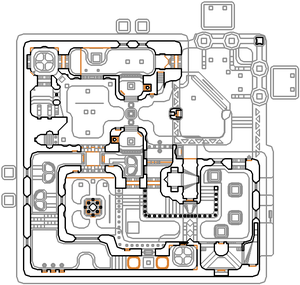 Map of Diminished Apparatus, cropped to only show the playable area
Letters in italics refer to marked spots on the map. Sector numbers in boldface are secrets which count toward the end-of-level tally.

The exit "switch" is actually made up of six switches that exit the level, and two that do other things. The first switch on the left and the third switch on the right (check the automap if you're not sure) activate the level's Easter egg. Press these two switches and then go back to the area behind the yellow door. Move towards the two red doors at the opposite end of the room, and you should see a small new inlet with a strange fleshy texture inside having opened up on the left-hand side of the switch behind the doors. Inside this inlet is another switch. Pressing it will cause three panels with a bizarre texture on them and the caption "Long Live Lazy" to appear around the level.

* The vertex count without the effect of node building is 4121.

The bizarre texture on the three panels that are made visible by activating the Easter egg (see Other points of interest) is a heavily edited image of Girg Jatsand, an image popularized by the Jetsons. The caption "Long Live Lazy" is a reference to "Lazyadon", Brett Harrell (Mechadon)'s other "nickname".