MAP22: Fire Play is the twenty-second map of Kama Sutra. It was designed by Adolf Vojta and Jakub Razák and uses the [[]] music from TNT: Evilution.

Method's "only 2004 work" :) but pretty good one. It was based on an interesting fights with not much place to move but the map looks large though.
My work on this map became after final yellow bars and ended at the exit hall. That part just needed to increase :) 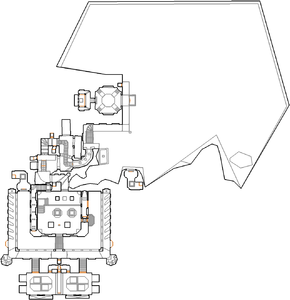 Map of Fire Play
Letters in italics refer to marked spots on the map. Sector numbers in boldface are secrets which count toward the end-of-level tally.

* The vertex count without the effect of node building is 2144.