MAP22: Forbidden Grove is the twenty-second map of Doomworld Mega Project 2016. It was designed by rd and uses the music track "Oversnow," originally composed by Eric Heberling for The Elder Scrolls II: Daggerfall. 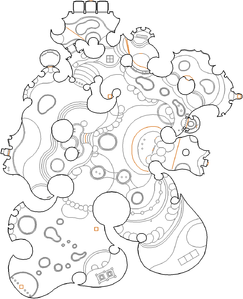 Map of Forbidden Grove
Letters in italics refer to marked spots on the map. Sector numbers in boldface are secrets which count toward the end-of-level tally.

The three armor bonuses are behind some bars behind a waterfall in the northwest section of the map, but there is no way to lower these bars or enter the room without using the no-clipping cheat. As a result of this, the maximum number of items possible on this map is 88%.

* The vertex count without the effect of node building is 5190.