MAP22: Gonna Never Have To Die is the twenty-second level of the first episode of Back to Saturn X. It was designed by Matt Cibulas (RottKing) and Paul DeBruyne (skillsaw), and uses the music track "Womp" by Sarah Mancuso (esselfortium). The par time is 6:30. In the official add-on version, this level's name is Vesta Station. 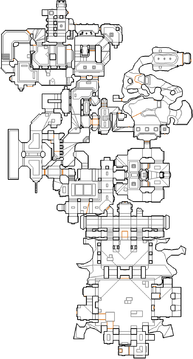 Map of Gonna Never Have To Die
Letters in italics refer to marked spots on the map. Sector, thing, and linedef numbers in boldface are secrets which count toward the end-of-level tally.

Take the shotgun then turn right and follow the corridor until you reach a red key door; on Hurt Me Plenty (HMP) skill level or higher, watch out for a revenant that is released from a closet behind you. Continue north past some zombies to a junction and go up the steps on your left, then enter a tunnel on your right to reach a high corridor that you can follow due north past several monsters until you reach an arachnotron. Flip the switch in the north-east corner to open the nearby doors and reveal one or more chaingunners guarding a super shotgun, as well as a mancubus and demons behind you, then go through the doors to open a chamber behind you that holds revenants on HMP or higher - remember this for later. Go up the steps at the back of the room and turn right to see a chamber with a rocket launcher which is guarded by zombies and a Hell knight. Open the west door and kill a revenant waiting ahead, then press the arrow button next to the lift that the revenant was standing on to lower it - watch out for some imps in a vent shaft on the way down.

Use caution as you step off the list, as a baron of Hell (or arch-vile on Ultra-Violence (UV) and Nightmare (NM)) will be released to your right. Look south to see a red door - it cannot be opened directly, but if you follow the hallway north and east you will find a button that opens it, revealing one or two revenants behind you. Go through the red door into a dark room and head past some imps and a spectre to reach a switch in the north-west corner, press it to lower a nearby lift then go up and head south into the next room where some zombies are guarding another switch - this switch is one of two needed to reach the blue keycard. Head east between some crates to a silver door and walk past it to see a switch on the wall ahead; after flipping it, slay the knight (or baron on HMP or higher) that teleports behind you then go back to the door and step through it to return to the room with the super shotgun. Go back through the twin doors and enter the chamber that opened behind you earlier, then go to the back wall to find a "LOCK" panel that will open a pair of bars just behind it. Go through the bars and activate a lift to your left, kill any zombies hiding on either side of it then ride the lift up to a room which holds the blue keycard.

Enter the tunnel in the north-east corner of the room, which contains one or two lost souls, and follow it until you drop into an outdoor area with another super shotgun - just before doing so, flip the switch on the left-hand wall to raise some platforms which will allow you to backtrack later. Step around the low wall to find a lift guarded by a demon and press the button next to it to activate it, then go up and follow the path north and west past some small enemies to drop into a watery cavern. Follow the cavern north past a knight to enter a room with fences on either side, then head straight forward to find a supercharge and rocket launcher in front of two switches - the right-hand switch clears your way to the blue key, while the arrow button lowers a lift at the cavern entrance. Press that button and run back to the lift before it rises again, then go back to the grassy area and enter the green tower in the south-east corner to collect a chainsaw and some rockets. Press the arrow button here to raise the platforms (if you did not do so previously), then straferun across them to get back to the blue key.

Go back to the room north of the starting point and climb up the steps in the north-west corner to find a blue key door. Open it and look left to see a plasma gun you can take, then go through another door straight ahead and turn right to see one or two arachnotrons ahead. Go forward until you see a doorway on your right and kill one or two revenants that emerge from it, then press the button behind them to lower a lift beneath you - watch out for imps waiting at the bottom, along with a baron on UV and NM. Go to the end of the room to find the red keycard, watching out for zombies that are released behind you, then go back to the starting point and open the red key door you passed at the beginning to reach a ledge with more imps, as well as a shotgun guy and pain elemental on UV and NM. Go down either staircase to a storage area with a mancubus and arachnotron, then flip the switch that is recessed in the south wall to open three closets on the upper level holding many imps (plus an arch-vile on UV and NM).

Enter the north closet and flip a second switch inside it to lower a teleporter behind you, then enter that teleporter and immediately run forward to collect a megasphere - you will be in another storage yard that holds several enemies, including one or two mancubi and a cyberdemon standing on a platform. Enter the alcove on the east side and press the button here to lower a lift, ride it up then dispose of some imps and revenants before flipping a switch located between the windows; this will open a chamber on the opposite side of the yard containing an arch-vile. Go into that chamber and climb some steps to another switch flanked by one or two chaingunners, which will raise a bridge to the cyberdemons' platform, then head across it to a passage with an arachnotron and follow this round to a door. Open the door to find one or two mancubi guarding the exit teleporter.

* The vertex count without the effect of node building is 4459.