MAP22: Habitat is the twenty-second map of TNT: Evilution. It was designed by Christopher Buteau and uses the music track "AimShootKill" by Tom Mustaine[1]. 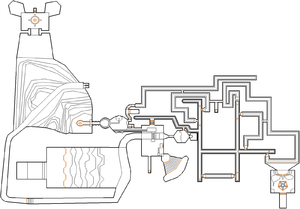 Map of Habitat
Letters in italics refer to marked spots on the map. Sector, thing, and linedef numbers in boldface are secrets which count toward the end-of-level tally.

In the starting place, follow the water path down to the left, and when you will be in the large grass area (as seen on the second screenshot below), come to a wide door at the far end. This will open automatically also unleashing many monsters. Dispatch them. If you learn that there is also an arch-vile, wait until it will spawn in another location of the grass area, after that dispatch it. Enter the open door. At first glance, this is an empty room. Walk through the rock wall straight ahead to reveal medikits and a blue keycard.

Backtrack to the starting position. Near the nukage cistern, walk under and take the box of shells. The floor will sink down to a room. Take the super shotgun placed on the safe water. To left to face north and open the green metallic wall. You will be in a large tunnel system. Turn right there and go straight to a fork. In the fork, turn right. Turn left and go straight until you come to a dead end. Another box of shells should appear. Take it and a wall should open to your right. Enter it. As you have the blue key, you can open a long wall to the south which is marked with two blue bars on either side. Open it. The yellow key should appear in the room in front of you. Take it. The room will become dark and the pentagram will appear. The monsters also will spawn here.

Now, when you have the yellow key, make your way out of the maze. Return to the entrance of it (use the automap to navigate). At the entrance, take the way west. You should notice a metal wall on your left. Open it and rise on the stairs. Open the door (you can go via the nukage room you came through earlier, but this is inadvisable, as you will lose health). Near the river at the starting area, take the passage north of the river. Drop down into a nukage pool. Press the switch, and a silver wall should lower letting you enter a small opening. Open the yellow bars here. Walk up the stairs towards another yellow bars. Simply approach them but do not open them nor enter the room behind them, this is not required. Return on the stairs down, and you will notice that the wall is open. Kill the pain elemental and the lost souls and press the switch that should appear. Return to the circular room with nukage by lowering the silver wall. A metal pipe will appear on the nukage, hinting that you need to touch the silver wall. Do that (you could touch this wall even without collecting the keys (see the last paragraph of Routes and tricks); the pipe is needed only as a hint; everything that written above depicts the fair walkthrough).

Enter an opening ahead (marked with several candle stands). The lift should lower. At the top, there will be both a berserk pack and an invulnerability sphere. Take them both, do not spare them, as there will be no any serious crowds to slay, except imps. The walls will lower revealing spectres and a large outside area similar to that you already seen, this one has a water river, that actually connects the one seen at the starting place. From here, cross the river and proceed towards northern opening. Jump into a cistern for the end.

If the level is played with the -respawn parameter set, there is a higher than normal chance of exceeding the moving platforms limit, causing the game to exit with an error message. This is due to the respawning monsters continuously activating the large amount of floor-lowering linedefs in the tunnels.

It will take quite some time to complete this level under UV max rules, as all of the enemies and all nine secrets are spread throughout the entire map, which is quite large in size. You cannot leave any of the long, winding tunnels in the east unchecked, for all of them are filled with hellspawn, and some of the secrets are located there.

On the other hand, under UV speed and NM speed rules, this level is one of the easiest in Evilution to finish. As you take the normal path through the level, you raise an L-shaped platform in the giant slime pit; walking across its western end causes the western pillar to lower, leading to an elevator up into the final area of the level. However, due to the way the Doom engine works, the walkover linedef that lowers the pillar can be triggered before the platform is raised. Through this shortcut, the level can be completed in under 20 seconds. It is also very easy to finish this level under UV pacifist rules with this route, as you face very little opposition on your way to the exit, and the few monsters you encounter on this route (the spectres at the top of the western elevator) are easy to avoid, as long as you awaken them by firing a shot with any weapon while waiting for the elevator to come down. This will cause them to move away from the location you arrive in, and then you can run past them to the exit. Consequently, all of the UV speed demos of this level are also UV pacifist runs.

It is difficult to successfully record a demo on this map with respawning monsters, especially NM100S demos, without the game crashing, as respawning monsters can cause the moving platforms limit to be exceeded (see the warning above.)

You do not need any keys to exit the level, all you need to do is simply walk into the exiting circle. This way, you will not have to explore the tunnels at all.

* The vertex count without the effect of node building is 1700.