MAP22: Hated Attic is the twenty-second map of NOVA II. It was designed by Ryan Anderson (obake) and uses the music track "Simple Solutions," originally composed by Mark Klem for STRAIN. 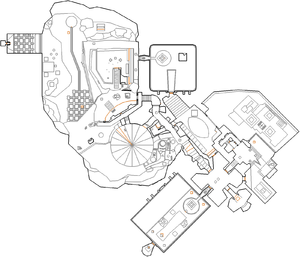 Map of Hated Attic
Letters in italics refer to marked spots on the map. Sector numbers in boldface are secrets which count toward the end-of-level tally.

* The vertex count without the effect of node building is 5061.

According to the map's author, the map was originally going to resemble the upper rafters of a gigantic attic, where players would traverse over a dark void. Despite the idea being scrapped, the name stuck. Remnants of the attic design remain as well, with ceiling details resembling lattices.

South of the spiral staircase is an area with blood irrigating in odd shapes. Look closely at the paths and one will see that there are various remote-control button symbols engraved into the floor, such as the symbol for "on/off", and "stop".