MAP22: Haunted Village is the twenty-second map of 2048 Unleashed. It was designed by Paul Corfiatis and uses the music track "Taking the Death Toll" by Robert Prince, taken from Duke Nukem 3D. 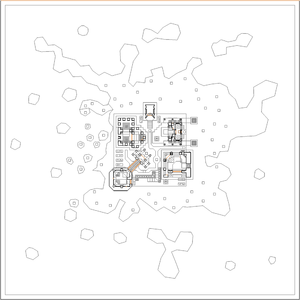 Map of Haunted Village
Letters in italics refer to marked spots on the map. Sector, thing, and linedef numbers in boldface are secrets which count toward the end-of-level tally.

You start facing a staircase with a Hell knight at the top, guarding a door which requires all three keys to open. Take the shotgun at the bottom of the stairs then turn left and go through the openings in the wall ahead to enter a building with imps. Climb the steps with armor and health bonuses and kill a knight that teleports in at the top then pull the chain switch behind it to lower a lift near the start point. Ride the lift up and pull another chain switch at the top - the door next to it will swing open to reveal a revenant guarding the yellow skull key. Watch out for another revenant teleporting in behind you when you pick up the key, as well as some imps visible through the windows that open on either side.

Go back outside and kill the spectres, imps and lost souls that have teleported in then head south until you reach two walls lined with blue and red firesticks. Go down the steps between the walls and kill some waiting spectres at the bottom then look east to see an arachnotron, which is guarding an entrance to another building. Take the super shotgun next to the arachnotron then open the large door next to it to confront one or two mancubi guarding a chain switch, which will lower a tall lift in the south-east corner of the room. Ride the lift up and follow the path round to the blue skull key, which overlooks the middle of the level.

Kill some more spectres, imps and lost souls that teleport in then go back down the steps between the red and blue firesticks again. At the bottom of the steps, head west to a metal door and open it to find some imps (and a knight on Hurt Me Plenty (HMP) skill level or higher) guarding a chaingun; take the weapon then pull the chain switch recessed into the west wall to lower a lift behind you. Ride the lift up to a barred doorway then turn left and follow the walkway round to another chain switch which will open the bars. Go through the doorway and cross the bridge to reach the red skull key.

Another wave of spectres, imps and lost souls will teleport in below, as well as two or three cacodemons (plus a pain elemental on HMP or higher). Go back to the start point and head up the stairs, open the stone door at the top and pull the chain switch behind it to finish the level.

A super shotgun can be found behind the north-east building containing the yellow key. Go down the steps next to it to find a berserk pack.

* The vertex count without the effect of node building is 2742.