MAP22: Hell's Limits is the twenty-second level of Community Chest 4. It was designed by C30N9 and uses the music track "Hell's Limits," composed by Stuart Rynn (Forty-Two) specifically for the map. 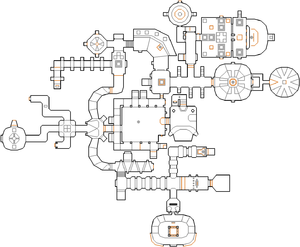 Map of Hell's Limits
Letters in italics refer to marked spots on the map. Sector, thing, and linedef numbers in boldface are secrets which count toward the end-of-level tally.

There's that particular combination of textures that is etched into the minds of players who have played The Plutonia Experiment. It screams "plenty of traps ahead". This level has that combination of textures, and indeed packs plenty of traps. In fact, one could argue that some of the traps could have been made even harder than they already are...

You begin in a room with a blue skull door and a second door blocked off by barrels. Depending on skill level, there may be no imps (Hey, not too rough and below, one imp (Hurt me plenty) or two imps (Ultra-Violence and above) facing away from you. From a pistol start, fire a shot to kite them away, then grab the shotgun and box of shells in the northeast. Finish off the imps, blow up the barrels blocking the door in the west and open it.

At the top of the surrounding corridor, there is a skull switch (we will call this the "courtyard switch"). Instead of flipping it, open the door next to it. There will be up to three shotgun guys ahead defending a rocket launcher. You may also have to watch for fire from an arachnotron dead ahead and from four cages in a currently inaccessible outdoor area further north, with:

Kill the shotgun guys, pick up the rocket launcher and face left (west). As you open up, a trap opens up in that direction with a revenant (Hurt me plenty and below) or an arch-vile (Ultra-Violence and above). You have barely any cover nearby to protect yourself, so knowing this trap is essential.

From the rocket launcher, head all the way east to a wooden door. Open the door and head into a semi-open room with a central structure. As you enter, a teleport trap activates, filling the room with a revenant, two chaingunners, two imps, a shotgun guy and two spectres (not present on Hey, not too rough and below). Go to the east side of this room and flip the switch. The central structure will lower, revealing the red skull key, As you collect it, the door to the room seals and a mancubus will teleport in. Notice that in the east of the room, two passageways next to the switch are open. Head through either one to a T-junction and kill the revenant there. Continue east to a circular chamber with seven imps and an arachnotron. Kill them all and flip the switch on the east side of the central metal block. Now you can backtrack out of the red skull key area.

As you open the door, you will be immediately greeted by up to three chaingunners. Kill them, and at this junction, go north to a wooden door with red skull decorations. Kill the chaingunner guarding the door. Open the door to reach a grey stone corridor with an arch-vile in an alcove at the end. Hold off at the end of the corridor and put some rockets into the alcove to kill it. As you proceed further north and step on the darker floor, a fake floor trap activates ahead, releasing:

Again, rockets should settle the matter conclusively in your favour.

You need to squeeze past the monsters in the rocket launcher area to get to safety and on Ultra-Violence and above, it can be a tight squeeze.

Back in the rocket launcher area, head out the door in the south and return to the corridor surrounding the courtyard. Watch for a newly-opened trap in the southeast side of the surrounding corridor - it has a pain elemental on all difficulties. Dispose of it and its lost soul spawn and flip the courtyard switch again. Run past the lowered panel in the west and open the door. First, at the junction, go west to an outdoor area, then go south to a yellow keycard switch. Flip it. backtrack to the junction and go south. Kill the chaingunner at the end and head through the doorway.

This leads to a short hall with five imps. Kill them all and flip the switch at the end. This lowers a panel in the southwest, leading to a set of steps up into an outdoor hall. Kill the two demons and baron of Hell at the end. (Do not run all the way east in this hall, as there is a drop trap at the end!)

At the junction at the east of the outdoor hall, go north. Follow the corridor around and kill the two chaingunners (one on hey, not too rough and below) guarding the blue keycard. As you pick up the blue keycard, the wall behind it lowers to reveal an arch-vile - quickly dispose of it.

You need to backtrack to the door next to the courtyard switch. On the way back, a few traps will have opened. In order:

Head out the door, lower the panel and return to the courtyard. Head up the surrounding corridor to the courtyard switch and open the door next to it. You should encounter four demons and three revenants (three imps on Hey, not too rough and below) released from nearby traps here. From the rocket launcher area, go east, but head through the door in the north wall of the next corridor. Kill the mancubus inside the next room.

This next room has an alcove with a platform in the northeast. Stand on it and flip the switch in the north wall to ride it down. This leads to a room with metal platforms above slime in a T-shaped pattern. Kill the two imps on the platforms, then carefully peak out to kill the revenant in the cage to the left (north). On Ultra-Violence and above, the cage to the right is also filled with an arch-vile, so be careful here.

Flip the two switches in the north and south of this room. Walls in the east will lower, revealing windows and an opening. Up to six chaingunners will attack from the windows, so you need to dispose of them ASAP. Jump from the center platform through the opening to the yellow skull key area.

When you pick up the plasma gun in this yellow skull key area, a trap opens with a pain elemental in the north. Head around to the back (east) of this room and pick up the yellow skull key from its pedestal. When you do so, four demons teleport in and an arch-vile appears in the alcove in the back of the room. Burst it down with your plasma gun.

Backtrack to the corridor surrounding the courtyard. Watch for a newly-opened pair of traps in the west side of the surrounding corridor - it contains three chaingunners and three imps. Two arachnotrons will also have teleported into the courtyard. Kill them and flip the courtyard switch one last time. Run past the lowered panel in the west and open the door. At the junction, go south again and make your way back to the east end of the outdoor hall. This time, go south.

Head around the panel and into an oval chamber with a mancubus on a blocked teleporter. Drop down and flip the switch in the north of the water pool at the bottom. This lowers the bars surrounding the teleporter, but also allows a big horde of monsters to teleport in:

Plasma will be your savior here. once the bars surrounding teleporter have finished lowering, step through it.

You will find yourself facing a large door. Open it and collect the goodies inside, then head back out and flip the switch to raise the bars ahead. On Hurt me plenty, you'll have to kill a cacodemon; on Ultra-Violence, two more lost souls have to be dealt with. Lower the metal wall in the west and ride it up, and you'll find yourself at the east end of the outdoor hall.

This is the point of the map where one would ask "Why is so much ammo being given with little risk so late into the map?" To top that off, the large space that is the courtyard seems somewhat underutilised. Put two and two together, and a seasoned player can guess what will happen when they backtrack to the courtyard.

Out of the possibilities, the good news is that it is a one-on-one cyberdemon battle, and the blue skull key has finally lowered from its pillar in the courtyard. There's enough space to circlestrafe, but the danger is suffering splash damage when the rockets explode against the walls. Pull out your rocket launcher and duel the cyberdemon to the death, then grab the blue skull key.

Lower the platform in the east and ride it back up to the starting area. Now you can finally open the door in the starting room. Kill the revenant ahead and flip the switch at the end of the corridor to end the level.

* The vertex count without the effect of node building is 2251.