MAP22: Impossible Mission is the twenty-second map of Plutonia. It was designed by Dario Casali and uses the music track "The Dave D. Taylor Blues" from Doom II (the same as Doom II's MAP22: The Catacombs). 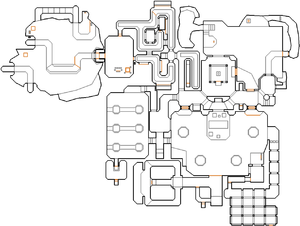 Map of Impossible Mission
Letters in italics refer to marked spots on the map. Sector, thing, and linedef numbers in boldface are secrets which count toward the end-of-level tally.

Unlike most maps, none of the nukage in this level is harmful.

You start on a raised platform. Walk forward to activate a lift and go down to the floor below, then turn right (west) and head straight forward to some steep steps. Go up the steps and head round the corner then go north into a passage and follow it until you drop down to a nukage pool. You will see some chaingunners and barrels to your left - on I'm Too Young To Die and Hey Not Too Rough skill levels you can take them out with one well-placed shot from a rocket launcher if you have one, but on Hurt Me Plenty (HMP) or higher you can do nothing and instead wait for a Hell knight to blow up the barrels with one of its projectiles.

After clearing the way, head to the south-west corner of the pool to find the blue keycard. Arm yourself before picking it up as you will drop into a room containing three demons (or shotgun guys on Ultra-Violence and Nightmare). After killing them, throw the switch on the south wall to reveal a teleporter that will put you on top of a nukage-fall. Walk forward to drop down to the room east of the blue key area.

Go back down the stairs and immediately turn left to enter a maze-like area infested with (depending on skill level) zombiemen, shotgun guys or chaingunners. Turn left at the first junction to reach a second junction, then turn right and follow the hallway until you pass a spine wall; as you walk past it, a knight and some chaingunners will rise from two nearby alcoves. Turn left at the third junction and walk through the chaingunners' alcove to find a button, press it then return to the third junction and head west into a room with burning barrels and imps.

The switch and teleporter in this room are out of reach; instead, go through the west doorway to find a rocket launcher then step on the lift behind it, which will take you down to a chaingunner ambush. Go through the doorway in front of you to see a bridge over a large nukage pit which is guarded by various enemies, including a couple of arachnotrons; follow the bridge until the center part sinks into the floor below, then head to an opening in the north-west corner of the nukage and turn right to see a staircase guarded by (depending on skill level) five zombiemen, shotgun guys or revenants. Head up to the top of the stairs then follow the stone path round until you see a step leading up to the arachnotron's platform where you can press a button to raise the bridge again.

Go back down to the nukage and enter the nearby teleporter to return to the start of the bridge. You can now follow it all the way to the end, where a baron of Hell guards the yellow keycard.

Drop back into the nukage and go to the north-west corner again, press the button that has appeared here then enter the teleporter again and step backwards to get on the lift before it rises again. Backtrack through the chaingunner maze to the starting room, watching out for zombies and a revenant that have been released into the area, then head through either of the south doors (which require the blue key) to another nukage area and head to the south doorway to destroy an arachnotron and some imps, then go through and head west to a junction guarded by a mancubus. Turn left or right and follow the tunnel round to the west side, where some chaingunners are guarding a lever that you need to pull.

Go back to the previous room, where four nukage-falls have lowered to reveal more mancubi, then go through the east doorway to enter a tunnel with metal arches and follow it to a room with four spectres. Press the lion switch in the south-east corner of this room then go to the north-west corner to an open door and turn right to get on a lift which leads up to a switch between two yellow skull bars. Flip this switch then return to the room with burning barrels to find that the bars here have opened, letting you flip another switch behind them that will lower the nearby teleporter. Equip a powerful weapon such as the BFG9000 before entering the teleporter as you will have to battle a number of barons, as well as an arch-vile on HMP or higher; use the megasphere to your right (supercharge on Ultra-Violence or Nightmare) to help you. Once the platform is clear, claim the red keycard that the barons were guarding.

After leaving the starting room, head up some diagonal steps to find a plasma gun. If you head due east from this point you can go up some more steps leading to a super shotgun.

It is possible to flip the switch behind the yellow bars from the side without raising said bars. This allows you to skip straight to getting the red keycard.

* The vertex count without the effect of node building is 1427.