MAP22: Knowledge is Power (The Mapwich 2)

MAP22: Knowledge is Power is the twenty-second and final map of The Mapwich 2: The Mapwichening. It was designed by Bridgeburner56 and Joshua O'Sullivan (Dragonfly), and uses the music track "The Infinite Sky" by Zach Siegel. 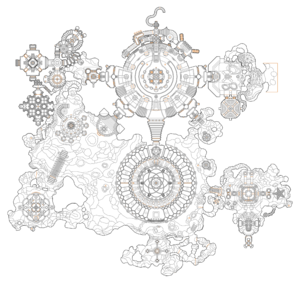 Map of Knowledge is Power
Letters in italics refer to marked spots on the map. Sector, thing, and linedef numbers in boldface are secrets which count toward the end-of-level tally.

Four diabolists (thing 5920, 5921, 5922 and 5923) are dormant and not tagged, but the other monsters in this northern monster closet have tag 165. So, during the final fight, when you use the switch at the north end of the hub that removes half of the bars at the northeastern room, these four monsters will never wake up, making 100% kill impossible on easy skill levels. They are at the same position as four arch-viles on Hurt me plenty and above, which are correctly tagged.

The (absence of) data was last verified in its entirety on January 3, 2022.