MAP22: Las catacumbas is the twenty-second map of Doom 2 in Spain Only. It was designed by Justin Kelly (Breezeep) and Richard Frei (Tarnsman) (credited as South American McGee), and uses the music track "La Tomatina," composed by Brayden Hart (AD_79) under the alias of Enrique Iglesias. The par time defined in MAPINFO is 2:30. 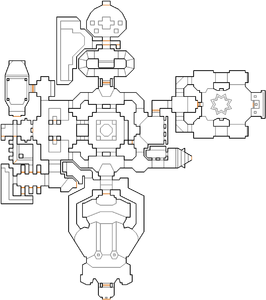 Map of Las catacumbas
Letters in italics refer to marked spots on the map. Sector, thing, and linedef numbers in boldface are secrets which count toward the end-of-level tally.