MAP22: Limbo is the twenty-second and penultimate level of most console versions of Doom, based on the original E3M7: Limbo with modifications made to adapt to the consoles' memory and ROM size limitations. It was converted by American McGee and originally designed by Sandy Petersen. The map first appeared on the Atari Jaguar, and was later ported to the 3DO, Game Boy Advance, Sony PlayStation, and Sega Saturn consoles. 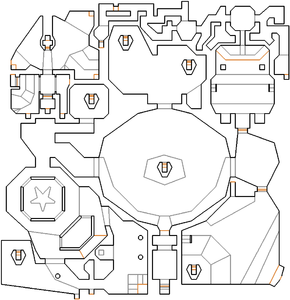 Start by heading forward to a large round room filled with lava. Follow the semi-circular platform to the left, go through the doorway and then turn left to a gray octagonal structure. Turn left and head forward to a high-ceilinged area with metal pillars. In the corner ahead is the blue skull key on a platform surrounded by lava. The bridges next to the platform drop away when you take the key, but this should not be an issue.

Backtrack to the circular room and follow the semi-circular platform round to the east doorway. Through here are two blue doors - go through the north door, drop into the lava pit behind it and climb the stairs. Keep going forward to find a hole in the floor, leading to a maze of lava-filled passages. Drop into the hole and go forward to an island with radiation shielding suits. Take one and go through the west exit, then go forward to a second island with more radiation suits. Go through the west or north exits from here and keep heading west. If you see a teleporter, do not use it yet - go south and west to find a platform with the red skull key, guarded by a shotgun guy. After taking the key, press the gargoyle switch on the south wall then press the skull switch directly behind it. Return to the teleporter you passed earlier and step into it.

You will return to the area where you found the blue key. Backtrack to the large circular room and head north across the lava to the north doorway. In the next area, turn left and head towards the hexagonal brick structure in front of you - inside is a teleporter that leads to a platform in the exit area. Press the switch on the west wall, then drop into the lava and head east up some steps; a bridge has raised here so you can reach the yellow skull key. Step into the nearby teleporter to return to the previous area. When you step off the teleporter, turn right and right again; you will see a platform in front of you with another radiation suit and medikits, should you need them.

Return to the area where you found the blue key and head southwest, to a lava pool in the south-west corner of the level. Enter this pool and go north to find another brick structure with a teleporter; step into it and press the switch in the room you arrive in, then backtrack through the teleporter and return to the circular room. Enter the teleporter inside the brick structure in the center of this room; in the small room you arrive in, cross the bridge, open the yellow door and press the switch behind it. This raises a bridge to the exit door.

At the start of the level, turn around to see a wooden door. Open it to reveal an alcove containing a backpack, as well as two cacodemons on Hurt Me Plenty or Ultra Violence skill levels. The alcove will also open when you enter the circular room north of the start point.

In the south-western corner of the map is a lava pool with a switch in its south-eastern corner. Pressing this switch opens the gray octagonal structure in the area to the north. Inside the structure is a star with a soulsphere, a rocket launcher and a box of rockets on it. These items are guarded by two or four cacodemons depending on skill level.

A set of 4 shotgun shells (thing 59) and an energy cell (thing 120) have no flags set for any of the difficulty classes, so they do not actually appear in the level.

Numerous changes exist in the level compared with its PC version:

Some rooms in the level were redesigned:

* The vertex count without the effect of node building is 737.