MAP22: Locus Perditus is the twenty-second map of Plutonia 2. It was designed by Erik Alm and Adolf Vojta (Gusta), and uses the music track "Deep into the Code" by Robert Prince. The par time defined in MAPINFO is 2:30. 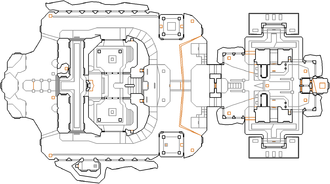 Map of Locus Perditus
Letters in italics refer to marked spots on the map. Sector, thing, and linedef numbers in boldface are secrets which count toward the end-of-level tally.

You will start on top of a berserk pack, so use it to kill the revenant and then enter the teleporter. Use the switch straight ahead and you will lower into the first big area. You will fight with a ton of monsters in this large area, and you need to cross to the east. To do so you need the blue key and the red key. Head inside the main structure and walk into the lava to find the blue key, but look out for the many monsters who guard it (you can use barrels to your advantage here). For the red key, go along the walkways outside of the main structure, and then into the dark hallway. The hall forks to the west where you can retrieve the key. When you have both keys, return to where you entered the area and there should be two doors, red and blue, that will raise the bridges to the other side.

As the bridges are rising, some mancubi will teleport on the other side, so kill them before proceeding. Grab the blur artifact and tear your way to the eastern side of the map. You need the yellow key here, but first you must press a few switches. The walkways that follow have switches on the north and south sides, which open up hallways behind them. You need to press both for the halls to be fully open. Of great help in this area is an invulnerability right next to the key pedestal (if you are not playing on Ultra-Violence or higher) and a megasphere when you enter. Now press the switches at the end of this hall to get the yellow key platform to lower. Upon grabbing the key, the two yellow doors behind it open revealing cyberdemons, and other monsters teleport in. Dispose of them, and open the exit doors, taking the teleporter to the exit.

To get a BFG9000, head into the main structure on the west side of the map and take either teleporter inside. You will teleport into a square where a spider mastermind is. Behind him is another teleporter, which takes you on top of a BFG9000, possibly telefragging a chaingunner if he was not killed already. Trying to get off the teleporter takes you back to the entrance switch. 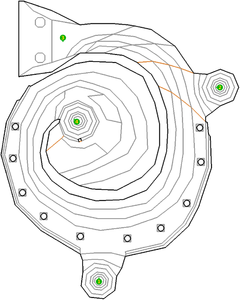 This is one of two maps in Plutonia 2 that has a separate arena for deathmatch. The other map is MAP33: Chocolate.

* The vertex count without the effect of node building is 3037.