MAP22: Nightfall (called Nightfall -- The Graveyard on the TeamTNT website) is the twenty-second level of Icarus: Alien Vanguard, set in a simulation of a graveyard. It was designed by Gary Gosson. It is notable for containing gravestones bearing the names of every person involved in the development of Icarus. The music for this level is a MIDI rendition of The Art of Fugue, Contrapunctus VIII by Johann Sebastian Bach. 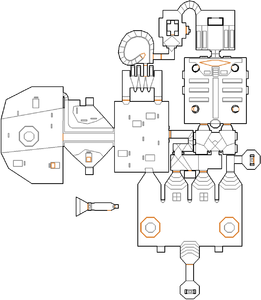 Map of Nightfall
Letters in italics refer to marked spots on the map. Sector, thing, and linedef numbers in boldface are secrets which count toward the end-of-level tally.

Open the door to find yourself in a familiar area. Head for the leftmost path through the open gates into the graveyard. In there, head through either door to the north. In this stone area, there are four openings, and one of them does not contain a coffin. Press on this particular opening to reveal a backpack and a passage to the red key. However, when you approach it, it will rise up, so you need to find another way to reach it. Return to the graveyard and head west across the bridge to the second graveyard. Here, find the gravestone that has Steven Phares' name on it, and drop into the grave. You will teleport and see the yellow key ahead. Head around Gary Gosson's tombstone to get it, then fall into the grave to teleport onto the blood fountain. Head back to the first graveyard and open the eastern door, then follow the passage ignoring the first two doors you come across. The next two doors will lead to a chapel area. Head through here killing the monsters and go behind the altars to a room with some pews. Head behind there to the northwest passage, and head through the libraries. With the yellow key, open the wall with yellow skulls and proceed downstairs to a switch. Press it to lower the red key platform. Now you need to get back to where you could see the key, because now you are able to grab it from that area. Go back to the first area and head for the rightmost door, where it will be open with a baron of Hell and the exit teleporter. Like all the levels in this wad, press on the furthest panel to the right to exit the map.

In the chapel area, press on the eastern side of the southeastern column to lower it, revealing a spectre, a super shotgun, a box of shells, and a switch. Hit this switch, and at the south end of the chapel you will be able to get a rocket launcher.

Although it is intended that you take the staircase to a switch in order to get the red key, the switch can be pressed from behind the wall, allowing immediate access. The trick was first documented by Graham "Grazza" Burgess in his 0:30 UV speed / pacifist demo. (Ic22P030.lmp, within icar_gb1.zip)

Two more tricks, however, allow access to the exit without getting the red key, although it can only be performed on Ultra Violence or higher. The edges of the fountains in the first area have linedef actions that are intended to be triggered in multiplayer only, which seal off the path to the red key and open the exit. However, if you enter the room north of the graveyard, awaken the arch-vile, and run toward the western fountain while keeping the arch-vile in your sight, you can launch yourself onto the fountain with the arch-vile's attack, triggering the linedefs in the process and opening the exit early. The trick cannot be performed on any lower skill level, as the arch-vile is not present.

While the above trick would appear to make the map impossible to finish (due to sealing off access to the red key), a suicide exit can be performed in the exit room by leading the baron of Hell into the simulation portal, waiting for a bit before entering the portal (so you don't telefrag him), and letting him kill you with a fireball as you run toward the barrier. If done correctly, your body will slide under the barrier and into the exit teleporter. These two tricks were first documented by Burgess in his 0:26 UV speed / pacifist demo. ([1])