MAP22: Pharaoh's Claim is the twenty-second map of TNT: Revilution. It was designed by Olympus, Steve Muller (Kyka) and Darryl Steffen (dobu gabu maru), and uses the music track "TermiNate and Torture," by Viscra Maelstrom. The par time is 4:00. 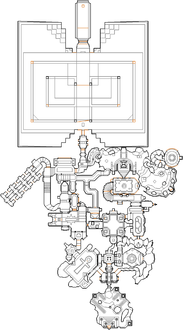 Map of Pharaoh's Claim
Letters in italics refer to marked spots on the map. Sector, thing, and linedef numbers in boldface are secrets which count toward the end-of-level tally.

* The vertex count without the effect of node building is 4571.

This level is one of seven in Revilution that was originally part of TNT 2: Devilution, having been cut from the project in 2014 during the events that led to Revilution becoming its own project. It was originally called Arenaphobia, and featured several large battlegrounds. Late in development, all but one of these was cut, and the level was renamed to Pharaoh's Claim.

The automap for this level includes several arrows which will be revealed once the player obtains the computer area map. These arrows point to the shootable pharaoh switches, giving clues to more secrets.