MAP22: Phase Center is the twenty-second map of 1000 Line Community Project. It was designed by Pegleg and uses the music track "The Dave D. Taylor Blues" by Robert Prince. 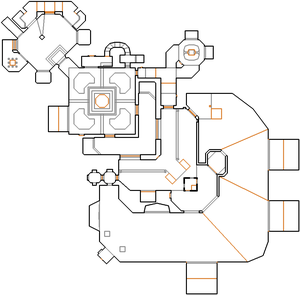 Map of Phase Center
Letters in italics refer to marked spots on the map. Sector numbers in boldface are secrets which count toward the end-of-level tally.

Open the door in front of you to find one or two zombiemen, then open the next door and kill one or two shotgun guys waiting behind it. Go straight forward to a small chamber holding the blue keycard and turn right when you reach it; you will see a switch on your right that will open the doors to the chamber, allowing you to go inside and collect a super shotgun before taking the blue key by pressing on either side of the pillar holding it. Lowering the pillar will also open a monster closet containing chaingunners, which will teleport and surround the blue key chamber when alerted.

Drop to the floor below the red key chamber then head north to a UAC door, open it and press the button on your right to lower a lift. Ride the lift up and kill any waiting shotgun guys and imps (plus Hell knights on Hurt Me Plenty (HMP) skill level or higher) then head north-east into the neighboring chamber and flip the switch to lower a pillar holding the red keycard - watch out for the chaingunners that are released when you pick up the key. From the red key, head west to a second lift and it will carry you down to a blue key door; behind this door is a hall with a large rotating column, guarded by several enemies including (depending on skill level) a cacodemon, mancubus and arachnotron. Press the button in the south-west corner to open another door in the opposite corner, kill the imps/knight waiting behind it then head up the steps to find a button (requiring the red key) that will open another door just below you.

Return to the main hall and head north-west through the door you just opened to a dark-gray room with zombies and three imps (replaced with an arachnotron on HMP or higher), then go through the north door to find two lifts with imps on them. Go up both lifts and press a button at the top of each lift, kill the chaingunners that are released then return to the main room and go through the west door - pressing the buttons has lowered a pillar holding the yellow keycard, allowing you to collect it. Three alcoves containing various monsters (including an arch-vile on Ultra-Violence (UV) and Nightmare (NM)) will open when you step on the key plinth.

With the yellow key, backtrack to the starting area - demons (and revenants on HMP or higher) will have been released into the large hall with the column, and shotgun guys and chaingunners (plus another arch-vile on UV and NM) have been released into the hallway to the south-east. Back in the starting area, ride either lift up to the blue key area then head north to a yellow key door and pass through it to get outside. Drop to the ground then follow the path south and west, watching out for various monsters that are released around you, until you reach a pair of pillars with exit signs on them. Press the button in the alcove behind these pillars to finish the level.

A shotgun is placed behind the first door on HMP.

A rocket launcher can be found in the yellow key area. On I'm Too Young To Die and Hey Not Too Rough the weapon is placed by the gray column in the middle of the room, and on higher skill levels it is placed in a monster closet containing a spectre that opens when you collect the yellow key.

* The vertex count without the effect of node building is 787.