MAP22: Pit of Woe is the twenty-second map of Project Einherjar. It was designed by Mike MacDee (Impie) and uses the music track "". 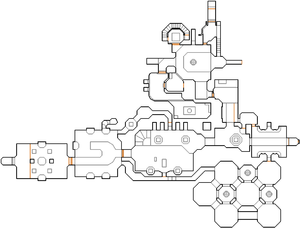 Map of Pit of Woe
Letters in italics refer to marked spots on the map. Sector, thing, and linedef numbers in boldface are secrets which count toward the end-of-level tally.

Juno begins the map suffering the effects of some sort of sedative, surrounded by the corpses of her captors. The vampire surgeon in front of her carries a super stim which can numb the drug's poisonous effects. Grab all the ammo in the pit before ascending the stairs and engaging the other guards. Take note of the yellow door here.

Weapons are light in this dungeon, so be prepared for some rough fights. Your goal is the windowed room next to the water pit encased by a horseshoe-shaped catwalk: the room is locked behind a red door. Search this area for what little supplies it contains and jump over the railing. The water vent leads into a small control room with the first Purger enemy, who guards the yellow key.

Through the yellow door is another dungeon wing and a torture chamber with a gruesome worg pit. Sister Gladys is on duty here, torturing one of her victims: kill her for the blue key and her auto-shotgun, then go through the blue door and drain the water to reveal the sump. Dive into the sump and kill another Sister of Contrition for the red key. The journey to the red door is lined with booby traps: flipping the switch beyond the door drains the water pit and reveals the exit.